From the moment the Yummirings arrived, my daughter (13 months) has been playing with them. Although she has been teething for a long time and we have tried a selection of teethers, she hasn't really found much relief from them. She instantly started mouthing on the cool metal Yummirings and soon found that the silicone beads were great at hitting the spot on her gums that she needed to chew on.
I am impressed by the quality of the rings, they are very smooth, shiny and have a nearly invisible join which makes the attachments extremely safe . Each ring is made from cutlery grade stainless steel and has a metal disc 'charm' with either an elephant's, zebra's or crocodile's head etched on it which is a cute little added detail. They also each have either a red, blue or green BPA-free silicone bead on, the perfect size for little gums to chomp on. The rings make a very pleasant jingly sound when they are shaken. This isn't a loud noise and has led to them being nicknamed the jingly janglies in our house, we can often hear where my daughter is from the sound.
If I were to identify anything negative about the product, it would be the price. I feel that for a teething toy, it is quite expensive.
My daughter has had great fun with these rings and has found other uses for them as well as chewing on and shaking as an instrument. They have been worn as a bracelet, put in a bowl and mixed and balanced on her head.
My 4 year old daughter has found that they are good to fiddle with, twist and turn. I asked her what she liked about them and she said the colours, the animals, they're smooth and I like holding them. I asked her if there was anything she didn't like about them and she said I don't like that they're not mine.
Overall, this is a great product and I would definitely reccomend it.

Available to buy from Yummikeys 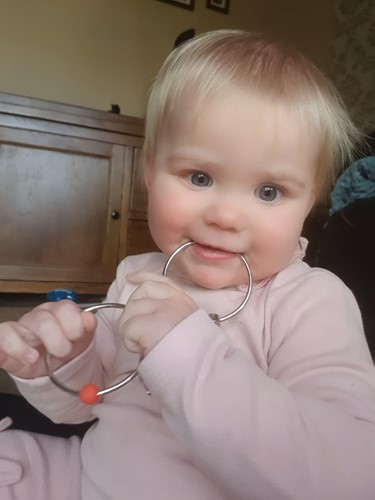