The first thing that appealed to me, let alone my little ones, upon receiving the Grow-With-Me 3-in-1 Piano Cushion by Infantino were the vibrant colours and the decent size of the piano aspect of the product. The piano cover is machine washable and the tummy time cushion is made of a wipe clean material which is handy for the odd accidental spill or regurgitation incident! It requires 3 x AA batteries so not excessive although these aren’t included. I like the fact that its an interactive toy suitable from birth; when my little one was kicking the piano, the noises definitely intrigued him and his older brother (2 years old) also enjoyed helping him press the buttons and hearing the different sounds. It has 35 different sounds with three settings on the back of the piano (1-2-3) that you can switch between to access melodies, normal piano key sounds and then animal noises. It’s a bit fiddly to open the back and change the between the sounds but nothing drastic, the piano is a separate plastic unit from the cover so slides in via a slit at the back. It also has the option of two noise levels and an off switch (always handy with kid’s toys!) The only downside with the piano is that the buttons to press to activate the sounds are quite small and aren’t the length of the keys on the piano cushion; they sit around the middle of each key which causes a bit of frustration when my little one was pressing the key correctly (or the picture of the animal) but nothing was happening. It would have been better if the buttons were longer and/or a separate animal button was present too, especially considering this toy is aimed at the younger audience of 0+ months and is priced at £29.99. But the sounds when they are activated are nice and clear and the animal sounds were particularly enjoyed by my little ones. The accompanying cushion is your standard tummy time cushion but has a cute little raccoon design on it and also has a detachable mirror and teether that can be used separately. All in all, a nice product to engage and grow with your little one, 4 out of 5 stars. 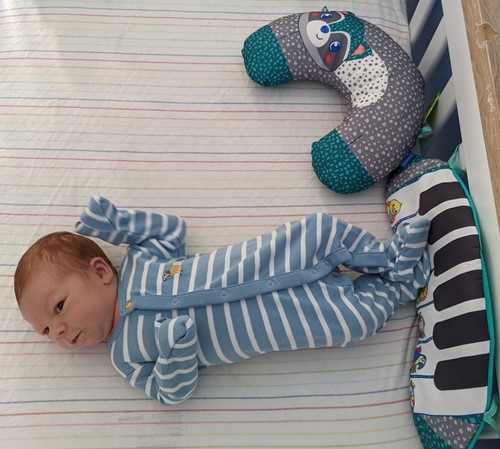