There is never a time too early for children to get involved with music in some way. It is said that babies can remember the music that they heard while in the womb, for up to a year afterward. 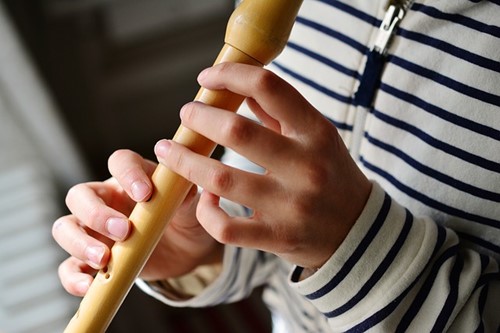 Toddlers adore music, and it is at this age that they start to try and dance, sing, and interact with sounds that appeal to them. Playschools and pre-schools will often have simple instruments such as triangles, tambourines, and child-size xylophones for the kids to play on.

One instrument that has always been highly popular in the UK, and around the world, is the recorder.

This is a really good instrument for young children to get into, and even if they are too young to play it properly, they can appreciate a parent entertaining them with it.

Why is music important to a toddler?

There are many thoughts on how music affects the growing minds of children, but it would appear that it helps with coordination, increased memory capacity, and boosts their confidence.

As they grow out of being toddlers and into young children, learning music can help with maths and reading skills too.

All in all, learning a musical instrument can help with the growth and development of a young child. Just listening to music, and singing in playgroups can improve a toddler’s social skills, and help them to learn to interact with others.

Why should you get your child involved in playing the recorder?

Although you may have to put up with some dreadful playing as they learn, by getting them involved in music, you and your child will create some great moments.

You can play together, and use the recorder to interact while you teach your child. They may end up taking up music as a lifelong hobby, or even pursuing it through college if you start them off early with a recorder. Giving your child their very first music lesson could put them on the path to furthering themselves academically later in life, or working with music.

When can you expect children to be able to learn an instrument?

Children develop at different speeds, and while some children start learning musical instruments at age 3, others take a little longer.

When it comes to the recorder, there are some areas with coordination that need to be learned. Young children might have problems understanding when to cover the holes and when to breathe. You might also have to consider that many young children lack a certain amount of patience.

A 5-year-old trying to learn the recorder, for instance, might take a year or so to get there. Whereas a 6 or 7-year-old, might learn within a few months. However, there is no reason why an older toddler couldn’t be given a recorder as an introduction to music.

Why is the recorder a good choice for young children?

The New World Encyclopedia notes that the recorder dates back to Medieval times. It then lost popularity in the 18th century due to other woodwind instruments such as the flute, clarinet, and oboe coming to more prominence.

In schools across the world though, it remains possibly the most common musical instrument there is. One reason why the recorder is a great introductory instrument is that it is very inexpensive.

For just a few dollars, a plastic recorder can be purchased. Playing the recorder takes some coordination, which is also good for children to learn, but it isn’t as complicated as other woodwind instruments.

Are there educational benefits to learning an instrument at an early age?

Many skills that come from learning a musical instrument are transferable to other areas of life. There is a great benefit to the student if musical education is started early.

The USC reports that children’s brains develop faster with music training, and this can affect IQ and grades later on. It is believed that other skills are learned through playing an instrument that can benefit the student too.

A child learning music will improve in areas faster than one who isn’t. These benefits can include learning to be patient, and being more resilient when things go wrong. Learning an instrument takes time, and children learn perseverance and also grow in confidence as they progress.

Of course, the downside is that you may have to listen to them play Baby Shark badly on a seemingly endless loop. Fortunately, the recorder lends itself to lots of music, and the Beatles and other great bands have produced songs that your little one can practice.

As an entry-level, and affordable instrument, it is hard to beat the recorder. With schools still using this instrument for young students, your child will be able to practice and interact with other children too.