Guest post, written and researched for Toddle About on behalf of Lil-Lets.

At the beginning of October, a series of Instagram pictures of Chrissy Teigen and her husband John Legend became a worldwide talking point. The images showed the couple looking devastated, sitting on a hospital bed after the loss of their baby, who would have been called Jack. For parents everywhere who have experienced similar pain, these pictures and the emotional caption spoke volumes. 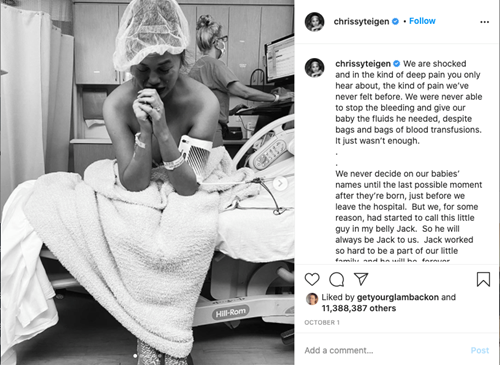 From the images, it is clear that both Chrissy and John are distraught. It is a sad fact that, perhaps understandably, the father’s pain often goes unnoticed in sad situations like this one. This October, we observe Baby Loss Awareness month, and it’s an important time to bring the issue into the light and allow grieving fathers’ voices to be heard. When a mother loses a baby, it is often assumed that the father must be strong and supportive. But we don't often talk about the extreme strain that baby loss can have on men's mental health.

Parents around the world endure this terrible pain, yet gender roles and the notion of masculinity often prevent men from speaking up or seeking the support they need. In light of the post featuring Chrissy Teigen and John Legend at their most vulnerable, let's open up the discussion and learn more about this harrowing experience that some parents endure.

How often do couples lose their babies?

The most frequent reason for losing a baby is miscarriage. In one YouGov survey, 50 per cent of respondents said that they had been either personally affected by, or knew someone that had gone through, baby loss. Overall, the estimated miscarriage rate in women who knew they were pregnant is around 10 to 15 per cent. However, in many parts of the world, there is still a lot of stigma surrounding the loss of a baby, and often, records aren't taken.

Around two million babies are stillborn every single year, but as many countries don't have a systematic way to record these deaths, the number could be even higher. There are also differences in the way we define baby loss around the world. Generally speaking, however, a miscarriage is considered to have occurred when a baby dies before 28 weeks of pregnancy.

How does it impact men?

For men, the emotional and psychological impact of losing a baby can be extremely traumatic. Of course, the mother is the one going through the physical trauma, but the impact that this has on the father should not be underestimated. Bearing witness to the physical pain of a loved one can also result in PTSD.

Many men watch their loved ones go through baby loss with a feeling of utter helplessness, conflicting with their instinct to comfort them. For many, this can lead to a serious mental health issue. Blogger Nick Harisson described the emotions he went through, saying: "I had no words of solace for my wife because very obviously everything wasn’t going to be okay. Through the blubbing I apologised to her, driven by the fear that I’d not met some outdated notion of a stoical impassive husband"

After the loss, the feelings of helplessness often persist. One study, published in the Journal of Women's Health, revealed that 40 per cent of men experienced a strong sense of vulnerability and felt powerless to help their partner after a loss. Research from the National Library of Medicine has also revealed that men are more likely to internalise their grief or attempt to seek distraction rather than talking about their loss.

Often, both men and women suffer in silence when it comes to baby loss. However, the pictures that Chrissy Teigen posted of her and John Legend are one example of the cathartic nature of sharing. It only takes a quick read of the comment section of the Instagram post to see the impact it has made. Despite some criticism, the majority of the comments express love and deep empathy. Many parents in the comments section have used the platform to express their pain after going through baby loss, explaining how important it is for them to be able to talk about it openly.

It is because of this that Baby Loss Awareness Month is so important. We need to keep having the tough conversations, whether that be on social media or to the people close to us, and we need to create a space in which grieving fathers, as well as mothers, feel able to express their emotions.

What can we do to help grieving fathers?

This Baby Loss Awareness month, it is important to speak openly about baby loss trauma and the ways in which it can impact both parents. Acknowledging that it is okay for men to grieve and process the pain however they need, is essential. We also need to break down the taboo of men having to suffer in silence, while putting out a sturdy, in-control persona. Opening up the conversation and allowing men space to express their emotions is the first step.

Of course, the subject is extremely sensitive, so be tender in your approach and allow them to guide the discussion. Give them the space to tell you how they feel and what they need from you. There is nothing you can fix by trying to offer advice or explanations. Instead, keep it simple, listen with purpose, and express the fact that you are sorry and are there for them. It is important that you don't shy away from asking them how they are coping. If they don't want to talk about it, they will tell you, but skirting around the subject is more likely to contribute to their feeling of isolation. Thanks to the pressures that society has put on men, they may not feel comfortable expressing their pain and bringing up the topic themselves, but in most cases, they will appreciate you asking and showing that you're thinking of them.

We all know that everyone grieves and feels pain regardless of their gender, so during this Baby Loss Awareness month, be sure to reach out to the men in your life who have undergone such trauma. Spreading love and support is of vital importance, so keep the conversation going and spread awareness as best you can.

This piece is written and researched for Toddle About on behalf of Lil-Lets.