Review: The Owl and the Pussycat; Royal and Derngate | Toddle About Skip to main content
Go Back 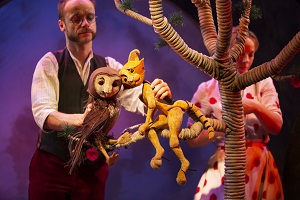 Owl and the Pussycat Review by VIP Member Victoria Coombes The Further Adventures of The Owl and the Pussy-cat written by Julia Donaldson and illustrated by Charlotte Voake has been brought to life this Christmas at The Royal & Derngate theatre in Northampton. The performance runs from Thursday 28th November until Sunday 5th January and is a magical puppet show aimed at the under 7’s. The performance was set in the lovely underground theatre room at The Royal & Derngate, with a large number of cushions on the floor as well as seating laid out. The children could sit comfortably and as there was no raised stage area they could get up close and involved with the story without characters towering over them. The show lasted for 40 minutes (without an interval) and involved a cast of two telling the story through the mediums of the original music, songs and fantastic puppetry. My two daughters aged 6 and 3 were captivated for the entire show and particularly loved the very realistic puppets. The cast really brought the puppets to life with their sound effects and movements. The scene changes and the props used were simple but very effective and the large variety of puppets really kept the children’s attention as they tried to identify the next characters from the story. In the small theatre the lighting and sound had been well set up so that it wasn’t too loud or bright but enabled parents to interact with their children through out the show without impacting on others. A relaxed performance is also being shown on Saturday 7th December with reduced sound and lighting for those with a range of disabilities. This was a lovely way to introduce younger children to the theatre in an informal and relaxed setting. My girls certainly enjoyed it and as huge fans of the Julia Donaldson books it was great to see one of them so cleverly and professionally adapted for the stage. We will certainly be looking out for similar shows in the future.