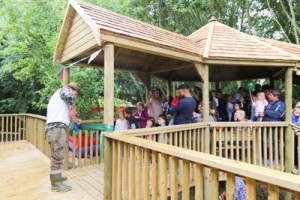 On Saturday 15th July at 11:00am, Mr Bloom from CBeebies officially opened The Childcare Hub in Knowlhill, a purpose built childcare setting focused on nature-based play. Cutting a ribbon from one of the high level walkways linking the Pre-School Rooms to the Garden, Mr Bloom also delighted young fans later that day with 2 live theatre shows. Offering childcare from 6 weeks to 12 years, The Childcare Hub includes an amazing Roof Garden complete with astro turf and raised vegetable beds, as well as a beautifully landscaped garden with Story Telling Circle, Bug Hotel and Forest Schools Area. Said Sharon Elliott, Childcare Director “We can’t wait to open our new home of nature-based play. We are all super excited and look forward to celebrating in style with Mr Bloom from CBeebies. Parents and children will also have the opportunity to explore the new play areas and plant their own Sunflower to take home and watch grow.”

The multi-million pound Childcare Hub is the brainchild of Architects, Ray Hole Architects that built Whipsnade Zoo new entrance, Penguin Cove at Paradise Wildlife Park and the regeneration of Bournemouth Pier. Children from Kids Play’s Knowlhill Day Nursery and Pre-School will be the first to move into The Childcare Hub on Monday 17th July, alongside other new children who have signed up specifically for the new setting. Parents wanting a tour or more details about the Childcare Hub should visit: www.ChildcareHubMK.co.uk 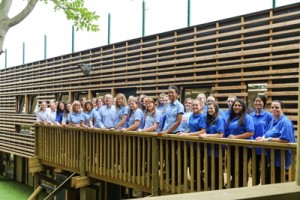 The Childcare Hub is located at 1A Roebuck Way, Knowlhill, Milton Keynes, MK5 8HL and it incorporates a Nursery, Pre-School, After School Club and during School Holidays, Camp MK Activity Day Camps. Part of the Kids Play Childcare Group, they also operate 3 other Nurseries in Milton Keynes, 5 After School Clubs & Breakfast Clubs, as well as 5 Camp MK Activity Camps venues or Mad For Camps.