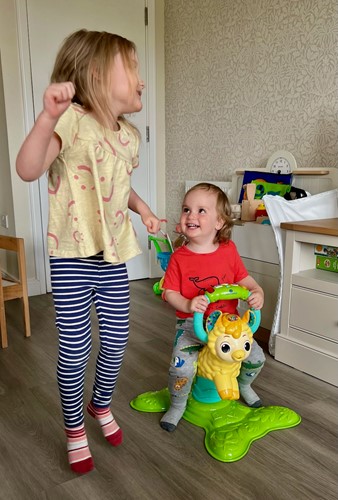 We were very excited and felt very lucky to get the chance to try and review something new!

To be honest, this is something that I wouldn’t have thought about buying myself. It is quite big and made from plastic and I tend to prefer buying smaller toys or wooden toys. However, when my little boy (age 20 months) saw the box, he was very excited. The bright packaging certainly caught his attention and he was keen to get it open and start playing with it straight away!

It was really easy to set up, which is great. It probably took less than 5 minutes to fully set it up and it comes with demo batteries which is fantastic, as it stops the mad panic search for batteries. They will need to be replaced but they should last around a month, so I thought that was very handy. It is sturdy and I would have no concerns about safety or about it falling over while my child is riding on it. It’s sturdy enough that he can happily play by himself on it.

As soon as it was set up, my little boy climbed straight on and it is really intuitive so he could easily master how to use it and what he did. He really did enjoy bouncing up and down on it and it was even more fun when his sister jumped alongside him. They both loved that! He liked that it played music and had buttons to press and interact with. However, he only played with it for about 15 minutes and then moved on to playing with a different toy. He has since played with it but for short bursts of time, unfortunately it isn’t his go-to toy.

I would definitely say the recommended age range is a bit out and at 20 months he is really getting a bit too old for it. I would say that, depending on ability, it would be more suited for 10 months - 18 months. I can imagine that when he was a bit younger, it would have captivated his attention for longer.

The bright colours are great and it is actually very cute for a plastic toy. The jumping action is great, really easy for them to do and they can easily hold on so it is very safe. It has a limited amount of interactivity, with some buttons, lights and music but I would say that there just isn’t enough interactivity for a child of nearly 2. It would really benefit from having more buttons and playing longer songs.

It has sensory crinkle noises and balls, but again I would say these are not pitched at the right age group as my little boy wasn’t interested in these, but he would have been when he was about 12 months old.

Overall, it is quite a unique toy and I haven’t really seen a ride-on toy that bounces like this before. Although it is bright, cute and fun to bounce on, I wouldn’t purchase it for a child of 22- 36 months. Although my little boy really loved bouncing on it initially, it hasn’t been a favourite toy since then. I think it would be a lovely toy for a much younger child and they would get maybe 10 months use out of it. It would be a lovely gift for a younger child as it is quite unique and unlikely to be something they already had.

Available to buy from Smyths