My son is 2 and his eyes lit up when he saw this. His giggles of excitement said it all. He loves dinosaurs and the sheer size of it was impressive. We constructed it before giving it to him which was very quick, easy and the stickers were not a problem to attach. The product contains demo batteries which means it can be used immediately rather than having the dreaded dash to the shop to avoid a child's disappointment.

Whilst it is a lot of plastic, which not everyone likes, vtech products are always well made and you know you're getting a quality solid product that can be passed to others to enjoy when it's outgrown. It can also be fully recycled at the end of its life (at a small electrical collection point). The packaging is fully recyclable too and not too excessive. Kids can be pretty rough with their toys but this will stand the test of time as it's solidly made.

The toy is very interactive, which was something immediately discovered by my son through his own exploration of the toy. Parts of the toy can be raised, flipped, lowered, twisted and the dinosaurs and park ranger are not restricted to only being used with the truck. A smaller truck detaches from the main unit which adds another element of play. My son did not leave this toy alone the first day he received it. He was using his imagination and doing some great role play which was lovely to watch. He was quite happy to play alone with it but it was also big enough that he could play together with his 5 year old brother, who also enjoyed it. It's still the first toy he comes down to find every morning.

The toy has flashing lights, many sounds (with volume control) facts and information. The toy is attention grabbing for a toddler with it's bright colour scheme and as with other toys in the toot-toot range each piece is a good size to handle.

The only limitations I'd mention is the net doesn't stay in the net catcher very well and needs a short sharp burst to shoot out properly which my toddler wasn't able to do alone (perhaps with more practice). The price is in line with similar v tech toys, which is quite high, so whilst I'd be hesitant to pay the RRP I'd definitely keep an eye on the sales.

The toy can easily be packed away at the end of the day and everything fits well inside it so it's not a funny shape to find a home for.

For the above reasons, I'd award this great toy 4/5.

Available to buy from Smyths 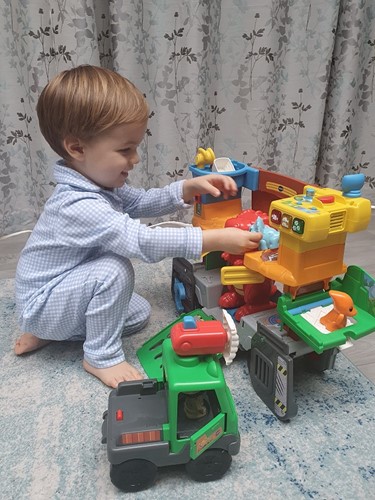