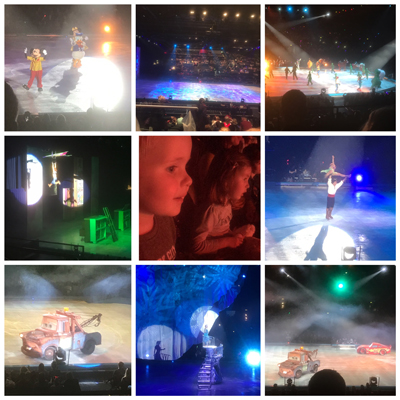 A family day out to Disney on Ice 2018 Written by Eloise from Toddle About HQ. Lorraine and I were delighted to be invited to watch Disney On Ice World’s of Enchantment with our families at the Genting Area in Birmingham. Neither of us had been to a Disney On Ice show before and we were both unsure of what to expect from it, however, both our 3 year olds were super excited to see some of their favourite Disney characters perform right in front of their eyes. There was a huge buzz of excitement as we entered the Genting arena, with lots of excited children (and adults) dressed as their favourite characters from the films. The show is guided by Mickey Mouse, Minnie Mouse, Donald Duck and Goofy, of whom had our little ones belly laughing out loud with his clumsiness. We were taken on an a magical adventure to four different locations, including Radiator Springs from Cars, Andy’s bedroom from Toy Story 3, the Underwater Kingdom of Ariel from The Little Mermaid and Arendelle from Frozen.

The sets, props and costumes for each location were wonderful! All of the stories were around 20-30 minutes long and were performed by some amazing skaters acting out each story brilliantly along to some dialogue and famous Disney songs from each film. Our children absolutely loved it and were captivated by all the songs, dancing and skaters flying across the ice rink including Lightening McQueen whizzing around the ice and the snow falling through the Frozen Set. It was truly magical show for both myself, Lorraine and our families and we all have happy memories which will last a life time. If you’ve never seen Disney on Ice we would thoroughly recommend it. Whether you are 5 or 105 you are never too young or old for a bit of Disney, it is a day full of magic and fun and the great atmosphere tops of a truly wonderful day. For 2018 Disney on Ice dates, venues at ticket prices, visit https://www.disneyonice.com/gb/en-gb/worlds-of-enchantment