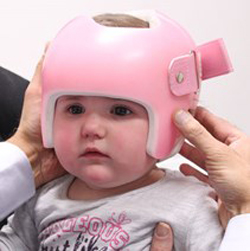 Plagiocephaly can be difficult to prevent, though there are ways of supporting natural improvement in head shape.[/caption] In November, the Congress of Neurological Surgeons published new guidelines recommending helmet therapy for plagiocephaly in babies. But, what is plagiocephaly and what can you do to treat it? We spoke to Saeed Hamid from The London Orthotics Consultancy to answer any questions you might have about this increasingly common condition. What is plagiocephaly? Sometimes referred to as ‘flat head syndrome’, positional plagiocephaly is a condition that occurs in infancy. It’s characterised by a flattening of the skull that can make your baby’s head appear misshapen and cause the forehead to bulge, or ears to become misaligned. A young baby’s skull is still relatively soft up to the age of 18 months and can change shape if there is constant pressure on a particular part of their head.

What causes plagiocephaly? Plagiocephaly can occur naturally during the early stages of pregnancy or birth, from foetal position in the womb, prolonged labour, birth itself or extended time spent in a neonatal unit. Slight plagiocephaly is routinely diagnosed at birth and premature or breeched babies are more susceptible. Other causes include prolonged periods of time in a car seat or buggy, which are a lot firmer than old-fashioned prams. And some babies can have a preferred sleeping position which may cause flattening. Plagiocephaly can also be the result of a condition called torticollis, when a tight muscle in one side of the neck causes the head to tilt. This makes it harder for babies to turn their head and means that they are more likely to sleep on the side that is most comfortable for them. However, one of the biggest causes is thought to be the enormous success of the ‘Back to Sleep’ campaign – now known as ‘Safe to Sleep’ – which educates parents to place babies on their back while sleeping, to help cut the risk of sudden infant death syndrome (SIDS). It’s fantastic news that the number of infant deaths have halved and the advice remains that babies should always be placed on their back when sleeping. But it has meant a dramatic rise in the number of cases of plagiocephaly over the past 20 years. [caption id="attachment_1723" align="aligncenter" width="250"] 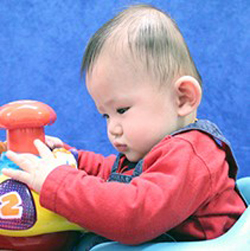 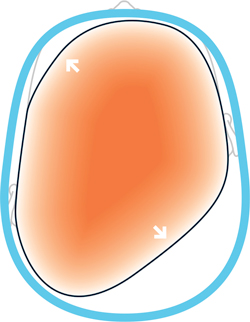 Sometimes referred to as ‘flat head syndrome’, positional plagiocephaly is a condition that occurs in infancy.[/caption] Can plagiocephaly be prevented? Since babies spend most of their early lives lying on their backs, plagiocephaly can be difficult to prevent, though there are ways of supporting natural improvement in head shape. Until four to five months, ‘repositioning’ (making sure your baby’s head is not always resting on one area) and tummy techniques are proven to encourage natural correction without the need for further treatment. Practising ‘tummy time’ is highly recommended when playing during the day to encourage your baby to spend as much time on their stomach as possible. Babies don’t tend to like lying on their front as they don’t have the strength to hold their head up – but persevere! Tummy time is a brilliant way to strengthen your baby’s neck muscles by encouraging them to look up. [caption id="attachment_1728" align="aligncenter" width="250"] 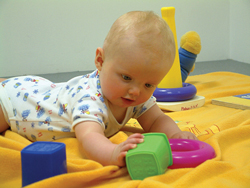 Tummy techniques are proven to encourage natural correction of plagiocephaly without the need for further treatment[/caption] What treatments are available for plagiocephaly? Positional therapy should resolve the issue in mild cases, but if your baby has more serious head flattening then helmet therapy might be an option. The NHS views plagiocephaly as a cosmetic issue, so doesn’t offer cranial moulding or ‘helmet therapy’. Instead, it advocates repositioning therapy as the best solution. However, the new guidelines from the Congress of Neurological Surgeons recommend helmet therapy in the treatment of moderate to severe positional plagiocephaly in infants where repositioning has proved unsuccessful. It’s important to start helmet therapy as early as possible to have a greater chance of improvement; our skulls harden as we grow and after the age of two it is impossible to have any impact on their shape. [caption id="attachment_1727" align="aligncenter" width="250"] 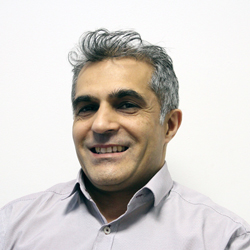 London Orthotics Consultancy Plagiocephaly Clinic is run by Saeed Hamid[/caption] Where can I go for help? If you are worried about the shape of your baby’s head and your GP is unable to help, then one option is to use this free flat head diagnosis form, where you can upload photos of your baby’s head, along with your contact details, and a clinician will respond within 24 hours. You can also contact LOC directly to ask for clinical help and support.