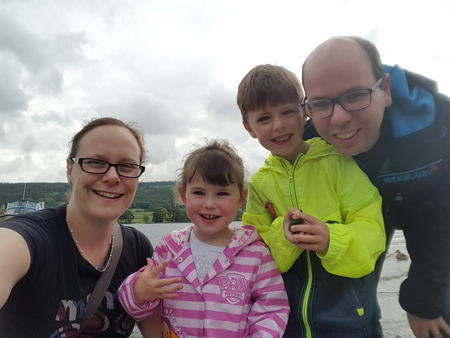 The x-ray showed Gemma's hip totally dislocated - I was in total shock! Guest Post by Rachael Daniels. On Monday 26th October 2015 our lives changed.  My daughter Gemma was diagnosed with ‘Clicky Hip’ – more formally known as Developmental Dysplasia of the Hip (DDH). I had no idea about this condition until I was faced with it and I have learnt a lot about it since. Gemma was 19 months old when she was diagnosed, and I just wish I had known more about the symptoms and signs before diagnosis. Maybe then Gemma could have received treatment earlier. That is why I am writing this post – to spread awareness of this condition so that other parents will hopefully spot it and recognise it sooner in their own children.

This is my daughter’s story. My daughter Gemma had a regular entrance into the world, average pregnancy and relatively quick labour.  Everything for the first year of her life progressed as milestones predicted.  She crawled around … and started to walk not long after her 1st birthday.  However her walking seemed a bit wobbly.  At first I put this down to being a toddler, having the normal amount of falls and needing to hold my hand to keep her steady. On a visit to family in early June my dad and brother commented how Gemma walked with a limp - before this I just thought it was me, so it started me thinking.  The next week we went to the park and I noticed she struggled to walk on the sand while another child her age was running confidently. I decided to ask the health visitor what they thought.  I visited our local clinic they watched her walk and advised me to take her to the doctors as they thought she may need help from a physio.  I booked an appointment and waited to see what they would recommend.  The doctor looked at my daughter’s legs, watched her walk and then she decided nothing was wrong.  But as I was concerned she would make a non-urgent referral. [caption id="attachment_2418" align="aligncenter" width="350"] 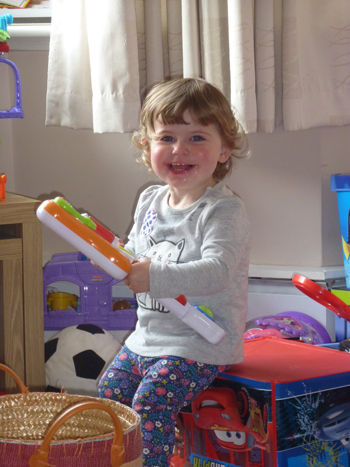 Gemma's walking seemed a bit wobbly at first and I put this down to her being a toddler[/caption] So I waited for the referral letter and then for the appointment.  This appointment would be on the 26th October 2015. I took my daughter and older son to the appointment with the usual snacks to pass the time.  Once we were called, the doctor again watched her walk and then checked her legs.  This time it was decided she needed an x-ray.  We went round to the x-ray department and then back to the doctor. He discussed her results with me and then showed me the screen displaying her x-ray.  I could see that the right hip was totally dislocated - I was in total shock! How can she be walking? Is she in pain? How was this missed? So many questions running through my head.  I couldn’t take it in. There were lots of new words and urgent appointments with consultants to be made.  Gemma was diagnosed with developmental dysplasia of the hip (DDH) otherwise known as ‘clicky hip’. It had been missed at her newborn and 6 week check.  She doesn’t meet any of the risk factors for this condition except for being a girl.  She wasn’t breech, or a twin and we don’t have this condition in the family. Gemma’s consultant was and is brilliant. He explained what her condition was and what would happen next and listened to all of our questions.  Gemma was booked into surgery for an ‘open reduction’. This is where they would clear out tissue stopping the femur head from staying in the socket and then place the femur head in to the correct position.  She would then be placed in a full spica cast with a broomstick; which is a cast down both her legs and up to her chest with only a gap to change her nappy.  She would have this on for 4-6 months with a cast change in the middle. [caption id="attachment_2417" align="aligncenter" width="350"] 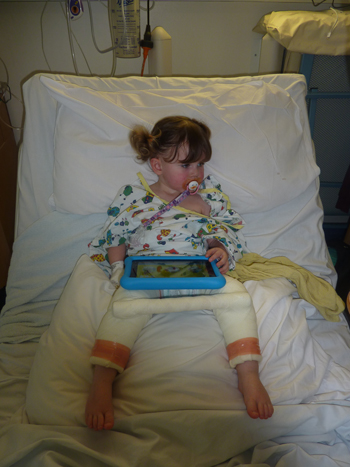 Following Gemma's operation she would be placed in a spica case for 4-6 months[/caption] When the date arrived for Gemma’s operation I was scared and worried for her.  How would she cope in her cast? How much pain would she be in?  Going down to theatre was a horrid experience but I knew the operation would increase her quality of life.  4 nerve-wracking hours later we got the call to say she was out of surgery, in recovery and crying for mummy!  Quick dash down to recovery and a first glimpse of my fragile looking baby, cuddle and reassurance given and she went back off to sleep. The next few days were spent worrying about pain and learning a whole new nappy routine.  Gemma adjusted well to life in cast.  After a few weeks Gemma became confident in her cast and could crawl around the house.  Add on a few more weeks and she amazed me by walking in her cast.  7 weeks in and time for a cast change.  Much quicker surgery and back in recovery in just over an hour.  After a small amount of grumpiness due to a change in leg position and changing how she walked and she was back to her happy self. 15 weeks post initial surgery and the day arrives for cast off. Yippee! I get my little girl squishy legs back and she gets to have a bath! Gemma being the trooper that she is was back on her feet again quickly although a little shaky at first and an odd walk to begin with.  Regular check-ups every 6 weeks to check how she was revealed that she needed some physio to help her on her way.  The next appointment showed that her hip socket had slightly deepened.  By the 3rd review she hadn’t shown as much improvement as they would like so she was scheduled for a CT scan to check the full position of the hip. [caption id="attachment_2419" align="aligncenter" width="275"] 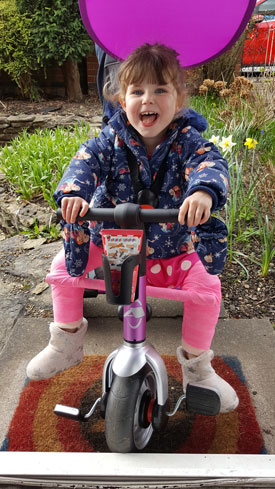 After Gemma's 3rd review and there not being much improvement, we were told she needs another surgery and full hip spica again.[/caption] Next consultant appointment and déjà vu - her hip is not in the correct position she needs another surgery and a full hip spica again.  We could leave her and see how she developed but this could lead to early arthritis and maybe hip replacements in the future.  Wanting to do the best for Gemma we opted for surgery again.  This time she would have a femoral osteotomy, her thigh bone would be cut and the top of the femur rotated so that it sits in the socket properly.  So now my little girl will have 3 scars, 2 from the previous surgery and a large one from this surgery. Roll on to this surgery and again all the stress that comes with it.  Gemma once more showed me how strong our children are; determined as she is battling through the pain and getting on with her life.  Having been through life in cast before, she was up and walking very quickly and taking the struggle in her stride. This time was shorter in her cast (only 6 weeks) but it was more awkward as this time she was toilet trained so had new battles to overcome. We are currently out of cast and waiting to see how her hip heals and forms. She is doing really well at the moment - her bone is growing and we are just waiting to see how the socket grows. Fingers crossed this time all will grow well. The future is not clear but hopefully we are on our way. [caption id="attachment_2420" align="aligncenter" width="280"] 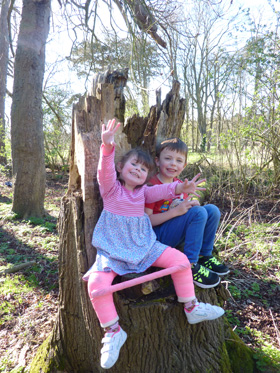 The time in her 2nd cast was shorter but was more awkward as she was now toilet trained, so new battles to overcome.[/caption]

Support and Further Reading I am forever grateful to the online help I have received from Facebook support groups and from the charity Steps, who have helped with sorting out special car seats.  Our consultant has been amazing explaining everything and always being there to help. Here are links to some of useful websites and resources: Facebook Groups: DDH UK Support Group: https://www.facebook.com/groups/ddhuksupportgroup/ My Hippy baby UK and Ireland: https://www.facebook.com/groups/859418044184445/ Websites: DDH UK: www.ddh-uk.org Steps Charity: http://www.steps-charity.org.uk/ International Hip Dysplasia Institute: http://hipdysplasia.org/developmental-dysplasia-of-the-hip/ Book: Castlife by Natalie Trice