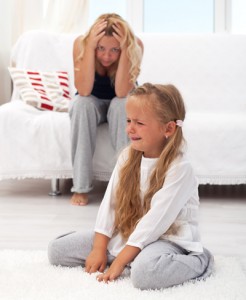 The morning rush can be a battle field A couple of days ago, one of my clients, Sarah, was in tears within moments of beginning our coaching session. Sarah is a senior manager in one of the UK’s leading companies.  She’s responsible for a team of nearly 100 people and very successful at her job, working under pressure to very tight deadlines on a daily basis. But it wasn’t this that had reduced her to tears.

It was her three and a half year old daughter, Katy.  She said that every morning – between 7.30 and 8.30am – she felt as though she was entering a war zone.

I asked her to tell me what she would ideally like to be happening in that hour, breaking down the time into 15 minute segments.  She was very clear.  She wanted Katy to get dressed without making a fuss and eat her breakfast instead of playing with it.  Most importantly, she wanted to have fun with her and the chance to chat and play before they both went their separate ways. The reality was very different.

Sarah had negotiated flexible working so that in the mornings she could drop Katy off at nursery which was something she really wanted to be able to do.  But every day, minor disagreements would quickly escalate into full blown wars and by the time she arrived at her desk she was feeling tired, stressed, guilty and hungry.

Dad would leave for the office at 7.30am.  Sarah would wake Katy up and they would have an hour before they had to leave the house. Sarah would let Katy play on her iPad while she had a shower and got ready for work.  Then she would try to get Katy dressed but there would be an argument because she didn’t want to give up the iPad and put on her clothes.  Mum would try to get her to eat breakfast.  This would take ages and she would only play with her food. Sarah never felt like eating with all this going on.  Katy would throw a tantrum – and so would Sarah. There would be a battle over teeth brushing and then they would storm out of the house.

8 out of 10 parents in a recent Parent Coaching Academy Survey said they found mornings ‘very stressful’. I asked Sarah to think about three changes she could make to what she was doing at the moment – to help her be the mum she wanted to be and get a little bit closer to that ‘ideal’ morning she so desperately wanted.

The important thing for her to remember was that she is in control.  If mum keeps doing what she is doing … she will keep getting what she is getting.  If mum changes what she says and does – she’ll bring about changes in Katy. So this is what Sarah decided to do.

07.30 – 07.45: Keep the iPad in the drawer and get dressed together instead of different times

07.45 – 08.10: Sit down and eat breakfast together and  brush teeth together – the very best way to help Katy to develop healthy eating habits.

08.10 – 08.30:  Have time for a play together and she wanted to do something that will make Katy laugh so that she can picture that giggling face for the rest of the day.

The decisions were made by Sarah – not by me.  She’s the expert on her family.   As parents, we rarely give ourselves the opportunity to sit down and think about what we want to happen – to set our ‘Parent Tom-Tom’ … but when we do we can have immediate results.

Family life can be so hectic that morning and evening routines can evolve in quite a random way. But once you put yourself back in the driving seat – you can really make a difference. She wanted me to share her experience with other parents because she just couldn’t believe that she could hold down such a tough and responsible job in the office – and get into such a total mess at home.  Her experience is totally normal – it happens to all of us.

As the Hollywood actor, Ed Asner once said, ‘Parenthood is part fun – part guerrilla warfare'! Sarah’s managed to transform her mornings with some very small, practical changes.    You can too.

Lorraine Thomas Lorraine Thomas is on the Toddle About Panel of Experts. She is the Chief Executive of The Parent Coaching Academy and author of ‘Brilliantly Behaved Toddler’.  She runs workshops for working parents with clients including Marks & Spencer, Morgan Stanley, Novartis and Barclays.  She is used as a parenting expert by Tesco.