By Barbara Scott, author of "Reflexology for Fertility" and practising Reflexologist for over 20 years! 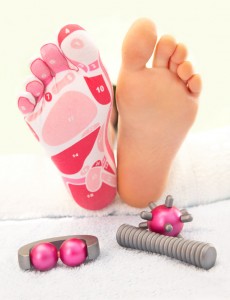 Some interesting facts came out of the summit.

Women are born with every egg that they will ever have and it is inevitable that these eggs will deteriorate with age. The rate that male fertility declines also increases from around the age of 40, although we know that it starts to fall prior to this. Although men are continually producing sperm, production slows down as we age and the sperm also tend to be less healthy. It makes sense that to preserve our fertility we need to take good care of ourselves and make sure that our health and well-being are at their optimum. Many couples believe that if they cannot conceive naturally then IVF will be the answer. Sadly many don’t realise that the success rates of IVF are still low, at around 25% per cycle. Additionally, undergoing IVF can be extremely demanding on many different levels - physiologically, emotionally, mentally, practically and, of course, financially. NHS funding is poor for IVF and self-funding can cost between £5,000 – £15,000 per cycle of IVF. It is estimated that an average of three cycles are needed for each successful outcome. Increasing numbers of couples are now turning to complementary medicine and therapies to help them when they face difficulties in trying to conceive. Complementary therapies aim to support the more traditional approaches to medicine, and can be a useful adjunct, particularly for fertility issues. They tend to look at issues on an holistic basis, which means addressing not just the physical issues, but emotional and mental issues too.

Reflexology is one such treatment that is gaining in popularity for both men and women. In a recent survey published by the Federation of Holistic Therapists, for 51% of those questioned who offered complementary therapies, reflexology was the main form of treatment used. Reflexology is a form of complementary therapy that has been in existence for many thousands of years, originating in ancient Egypt, but also used in India and China. There are apparently hieroglyphs in Egypt that depict this form of treatment being undertaken for the healing of ailments. Reflexology works on the principles that every part of the body is represented in specific reflex points in the feet, and by working on these points we are able to instigate changes or healing in the body. The body has an innate sense of being able to heal itself and sometimes just needs a gentle reminder of how things should be. It works in a similar way to acupuncture, in that it is based on improving the flow of energy through ‘meridians’, which are a set of pathways in the body along which vital energy is said to flow. Small ‘blockages’ can obstruct this flow of energy and it is here that physical, mental or emotional symptoms begin to present themselves. By working on these specific reflex points in the feet, reflexology aims to improve the flow of energy and therefore the presenting condition. As with most forms of complementary therapy, reflexology is rarely available under NHS treatment. However, we are seeing more and more fertility clinics making it available as a form of treatment to support assisted conception. Although data and research are limited for complementary therapies, there are now some good pieces of research being undertaken that are showing how effective it is.

ReproflexologyTM (Reproductive Reflexology) is a specialist form of integrative medicine that uses medical testing to measure efficacy and outcomes of treatment, alongside the most longed-for result of having a baby. It aims to help couples achieve conception naturally, but if this is not possible due to the complexity of their reproductive health issues, then it is used to support all forms of assisted conception. It is preferable that both parties attend an initial consultation, which helps the practitioner to assess their individual circumstances and plan their treatment. Treatment plans look at addressing any underlying causal factors that might be affecting fertility for both men and women. We also look at diet, nutrition and lifestyle as these can all be influencing factors. For women, this means ensuring that each stage of their menstrual cycle is functioning as effectively as possible. When working with men we use semen analysis to assess and measure progress and effectiveness of treatment, and aim to treat any underlying conditions that may be affecting sperm volume (numbers), motility (ability to swim) and morphology (formation). So how effective is ReproflexologyTM as a form of treatment? There is much anecdotal evidence that supports its use but we want to offer more than that. In 2011, we formed the Association of Reproductive Reflexologists and one of the things this allowed us to do was to carry out a small data collection study of 180 cases. We found that 68% of couples conceived when using ReproflexologyTM as part of their fertility journey, typically alongside IVF.  This compares with success rates of only 30% for those undertaking IVF alone.Even though this is a relatively small sample, the results of our study support our firm belief that ReproflexologyTM is an effective form of fertility treatment.

Success stories from some reflexology practitioners include:

If you choose to use this as a form of treatment to support your fertility, it is important to find someone who is appropriately trained. You will find a list of trained practitioners at www.reproductivereflexologists.co.uk. Further information about how reflexology can support you in conceiving is available in Barbara Scott’s newly published book, ‘Reflexology for Fertility’ and at www.serennaturalfertility.co.uk.

Barbara Scott trained with Nicola Hall of the Bayly School of Reflexology and she is a member of The British Reflexology Association, The Association of Reflexologists, The Federation of Holistic Therapists, and is now Chair of The Association of Reproductive Reflexologists. She has been in practice for over 20 years. She lives in Wales. Toddle About does not recommend or promote reflexology as a treatment. The opinions shared in this article are those of the author alone and are not endorsed by Toddle About. We hope it makes for an interesting read however!