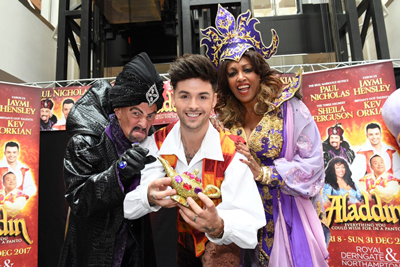 Paul Nicholas, Sheila Ferguson and Jaymi Hensley star in this years Pantomime at Royal and Derngate, Northampton[/caption] Three of the stars of this year’s Royal & Derngate production of Aladdin proved it’s never too early to book tickets for pantomime by launching this year’s show on Wednesday 16th August. Paul Nicholas as the evil sorcerer Abanazar, Union J star Jaymi Hensley as Aladdin and the beautiful Scheherazade Sheila Ferguson assembled at the nearby Grosvenor Centre where they took to the stage to entertain shoppers and give a sneak peek at this year’s show, which opens on Friday 8 December 2017. Actor, singer and musical theatre legend Paul Nicholas stars as the evil Abanazar, the sorcerer hell-bent on finding the magical lamp capable of granting three wishes. In a career that has spanned pop music, musical theatre and television, Paul is best known for originating the stage roles of Jesus Christ Superstar and Cats, and played the lead roles in Hair, Grease and Barnum in London’s West End and throughout the UK on tour, both as leading man and as a producer. Most recently Paul was seen in Albert Square in the recurring role of neighbourhood nasty man Gavin Sullivan in EastEnders and earlier this year Paul travelled to India where he spent a month with seven other celebrity faces in The Real Marigold Hotel for the BBC.

Union J boyband member Jaymi Hensley stars in the title role of Aladdin, having made his pantomime debut for Qdos Entertainment last Christmas playing Peter Pan. Having trained at the prestigious BRIT School for Performing Arts, Jaymi joined the boyband Triple J in 2011, a popular trio who entered the ninth series of ITV’s The X Factor. With an additional bandmate the band reformed as Union J, winning over the judges and audiences and coming fourth in the annual television talent competition. Since then Union J went on to great success releasing the popular hit singles Carry You, Tonight (We Live Forever) and You Got it All as well as two studio albums, their self-titled top ten album Union J and You Got It All – The Album. Later this month Jaymi will be appearing on Celebrity Masterchef. American singer, songwriter, actress and author Sheila Ferguson joins them as the Spirit of the Ring, Scheherazade. Best known for her music career as lead singer of the Three Degrees with hits including When Will I See You Again, Sheila has forged a successful career including with musical theatre roles in Thoroughly Modern Millie, Soul Train, Fame and Daddy Cool in the West End and on television, including her own sitcom Land of Hope and Gloria and appearances in I’m a Celebrity… Get Me Out of Here!, Celebrity MasterChef and The Real Marigold Hotel, alongside her Aladdin co-star Paul Nicholas. Staged once again by Qdos Entertainment, the world’s biggest pantomime producer, and the team behind last year’s record-breaking pantomime Jack and the Beanstalk, Aladdin will feature all of the traditional pantomime ingredients Northampton theatregoers have now come to expect in a fantastic new production of the well-loved adventure fairy tale. With almost 40,000 theatregoers attending last year’s pantomime audiences should book now for the ultimate magic carpet ride, Aladdin, which runs from Friday 8 to Sunday 31 December 2017. Tickets are priced from £11 to £31* and can be booked by calling 01604 624811 or visiting www.royalandderngate.co.uk. Discounts are available for all performances. * A charge of £3 applies for all transactions over £15. Does not apply to Groups, Friends or Disabled Patrons, and is per-transaction, not per-ticket.