Parent Feeders: Are You Feeding Your Toddler Too Much? | Toddle About Skip to main content
Go Back 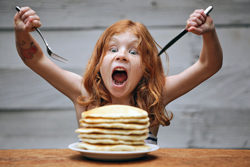 A Big Portion of Low Confidence, Anxiety and Guesswork Only a quarter of parents say they feel ‘very confident’ about the amount of food they give their child, and younger parents (aged 18-24 years) are significantly less confident than older parents.  Parents also seemed more concerned that their child was eating too little rather than too much with 73% expressing this as a worry. In contrast, only 25% of parents worry that their child might become overweight in the future. [caption id="attachment_1638" align="aligncenter" width="350"] 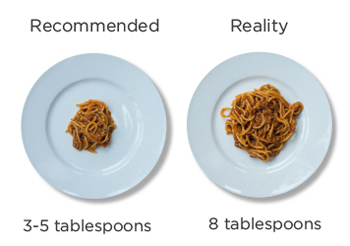 Only a quarter of parents say they feel ‘very confident’ about the amount of food they give their child[/caption] The issue is, that when we feed our children larger portions, this forms an acceptance about what is an appropriate amount to eat and this becomes the ‘norm’. In other words, how much you offer often determines how much your child will eat - and habits learned in early life generally tend to persist as we get older. The National Child Measurement Programme (2014-15) showed that by the the age of 10-11 years, a third of children in England are overweight or obese, which suggests that more parents should worry about feeding their children too much, and fewer should worry about feeding them too little. The research also showed a tendency for parents to use food or drink between meals to comfort their children, with 36% of parents using this method to calm children down when they are upset. Using food or drink as a reward or to comfort or distract teaches young children to rely on food to deal with their emotions, and it often becomes a habit that they will continue in later life (3). 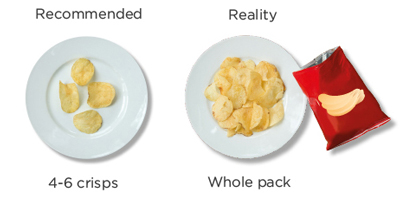 Portion Size Support for Parents The survey showed a significant lack of understanding about how much to feed toddlers. With new evidence linking large portion sizes to excess weight gain (4), its clear parents need practical advice NOW. To support parents, leading health and nutrition experts the Infant & Toddler Forum (ITF) have launched the innovative #rethinktoddlerportionsizes campaign, to encourage all families to rethink how much is on the plates of their young children. They have introduced the new portion sizes range - a visual, user-friendly guide that show how much to feed toddlers. The guide shows the recommended portion size ranges for children aged 1-4 and helps parents take the guesswork out of how much is enough. The online tables are accompanied by handy images showing the portion sizes – it’s a free online resource that can be used as an everyday guide of how much food and drink to offer your little one. See it here: www.infantandtoddlerforum.org/portion-sizes-table-2015 [caption id="attachment_1642" align="aligncenter" width="350"] 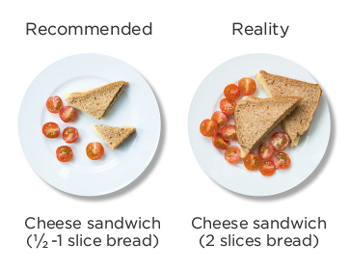 Have a routine and offer 3 meals and 2-3 planned nutritious snacks each day, rather than allow grazing.[/caption]

Mums The Word Layla Rogers, 29 and mum of one, used the portion sizes and told me: ‘I was shocked to find out I was giving my 18 month-old too much food.  In fact, I’ve always worried more about my toddler eating too little rather than too much and I’d offer additional food and snacks in between meals to reassure myself that she was eating enough. It was really useful to see the actual amounts that should be the norm for toddlers.  It’s helped me change not just how much food I put on the plate but also some of those feeding habits that are ingrained in all of us such as encouraging children to clean the plate!’ Top Tips for Parents 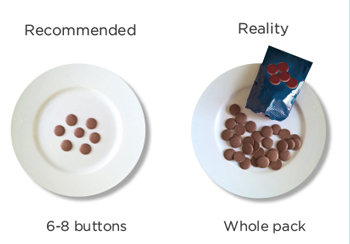 Limit sweets and crisps to one item once a week[/caption]

Check out how you are doing If you want to check out how you are doing, try Tot It Up, a toddler food tracker giving a summary of a toddler’s daily - or more importantly, weekly – food intake compared against current recommendations, together with tips on how to make small changes to maintain the right balance: http://www.infantandtoddlerforum.org/tot-it-up-login Join the chat Follow The Infant and Toddler Forum and join the chat on Facebook at www.facebook.com/InfantandToddlerForum/ and Twitter at twitter.com/InfTodForum #rethinktoddlerportionsizes …………………………….. *% of parents who chose at least one food portion (meals, drinks and treats) above the recommended range at least once across all the portion size questions **Adult portions based on SACN 2011 average energy requirements for adults:  page 85 of http://bit.ly/dietary-reference-for-energy

About the Author Judy More is a registered Dietitian and Nutritionist specialising in children’s nutrition. She is a past Chairman of the Paediatric Group of the British Dietetic Association (BDA). Judy has worked in both teaching hospitals and NHS community trusts and has her own consultancy www.childnutrition.co.uk, advising government departments, companies, schools, nurseries, private patients and community groups. She also offers training and writes books and nutrition articles. Her current interests are in children’s public health issues.