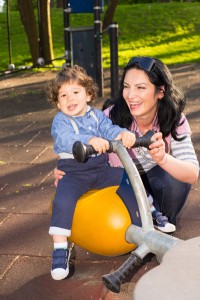 Encourage your toddler to step outside their comfort zone. If, for example, they are hesitant about getting onto a see-saw at the park, stand behind them and hold them so that they know they are safe. When “Me do it!” becomes your toddler’s favourite phrase and they begin to assert their independence, it’s an exciting and challenging time for you. It’s a vital learning milestone in their development as you see them beginning to do things for themselves and developing their own identity. But it is also tough, as they flex their muscles and push the boundaries to show you who is boss and that they are OK on their own. Nurturing that independence in a positive way is one of the most important jobs you’ll do as a parent.

When your baby is born, they are totally dependent on you for everything. But, once they become toddlers, the rules change and they become desperate to do as much as they can for themselves. “Me” becomes their enthusiastic mantra. As a mum, it’s rewarding to see them wanting to be able to do things on their own. After all, independence is high up on our list of priority in terms of what we want to teach our children. But those toddler steps towards independence can also be stressful. They’re beginning to make their own decisions about what they want and don’t want to do. And their choices may not always be the same as yours! Expect your toddler to refuse to do what you want – it is absolutely normal in this stage of their development!

Give Directions Instead of Ultimatums

When your toddler is determined to demonstrate their own mind,

it can be very easy to fall into the trap of using threats and ultimatums. Try to avoid them. You want to avoid engaging in power struggles with your little one and feeling forced into a corner so that the only way out is with a threat. They’re at a stage now where they don’t want you to be controlling them.  They want to get themselves dressed, feed themselves and make decisions about what they play with and how they spend their time. As a result, their behaviour may come across as defiant and that can be stressful for you as a mum – but remember, they are going through a confusing time and quite often just can’t help themselves. It’s what’s coming naturally to them. So when they are refusing to get dressed, instead of saying, “If you don’t get dressed right now, I am going to …”, say, ”When you get dressed, then we can go to the park.”

Believe In Them and Build Resilience

Often just saying, “You can do it,” will help give your toddler the confidence to believe they can – and will. Pay more attention to the process rather than the product of what they are doing and praise them for effort, approach and creativity rather than the result. This will encourage them to become enthusiastic and independent learners who don’t see activities in terms of success and failure but as experiences they learn through. So if your toddler is doing a jigsaw, praise them for their effort in trying different ways to find the piece that fits – rather than finishing the jigsaw. When they are playing with building blocks, let them experiment with making different shape towers from the same set of blocks. It will encourage them to understand that there are lots of different ways of doing things.

This is an exciting and sometimes overwhelming time for your toddler. You may notice rapid mood changes – wanting to be independent one moment and stuck like Velcro to your side the next! Follow your toddler’s lead. If they want to do things their own way and it’s possible, let them. If they want to cling to you, let them know that that is fine as well.

Nurturing your child’s independence is like letting go with elastic. It takes time and energy to get the balance right. Sometimes you’ll think your toddler wants to be at a distance from you out there on their own and doing their own thing – then suddenly they’ll come bouncing back for support and reassurance before they start stepping out again!

The best way to encourage your toddler to be independent is to love them unconditionally, be supportive and have bags of patience. Here are five practical ideas for you to try that will help you both:   1) Let Them Do What They Can  If your toddler can do it – let them do it. It’s going to take longer for them to feed themselves, dress or brush hair so allow a bit of extra time. If they’re struggling, resist the temptation to take over - give them practical advice that will help.   2) Encourage Them To Explore Their World Encourage them to be curious. Make your home as toddler-proof as possible so that they can explore safely without you constantly saying, “No, don’t touch that.” Encourage her to ask lots of questions, often by asking lots of good questions yourself.   3) Mix With Others Get your toddler used to spending time with other adults and children. Include times when you are away from them for short periods so that they learn to stand on their own feet.   4) Let Them Make Choices and Occupy Themselves Put them in the driving seat and give them choices. Let them choose what fruit to eat or what shoes to wear. When they’re choosing what books to read or games to play, encourage them to learn to play by themselves for short periods of time.   5) Help Them Try New Things Encourage your toddler to step outside their comfort zone. If, for example, they are hesitant about getting onto a see-saw at the park, stand behind them and hold them so that they know they are safe. Life can seem overwhelming for a toddler and they need to know that you are there and when they are confident, they will do it alone.

Lorraine Thomas with her family Lorraine Thomas is on the Toddle About Panel of Experts. She is the Chief Executive of The Parent Coaching Academy and author of ‘Brilliantly Behaved Toddler’. She runs workshops for working parents with clients including Marks & Spencer, Morgan Stanley, Novartis and Barclays. She is used as a parenting expert by Tesco.