Monkey Music: Introducing Little Ones to the Wonderful World of Music Skip to main content
Go Back

Babies remember music and songs that they have heard in the womb for up to 12 months after they have been born.

Claire Grimes, Principal of Monkey Music in South Warwickshire, explores the science behind the huge benefits of sharing music with babies. Did you know the ear is the first organ to develop fully in the womb – meaning that at just 11 weeks an unborn baby will be able to hear the world around him and take comfort from the sounds of mum’s (and dad’s) voice? Studies have shown that babies who hear different types of music in the womb are more easily settled as newborns, and less upset by changes in their environment. Another study has shown that premature babies who were sung lullabies reached normal weight quicker, were allowed out of hospital sooner, and were less stressed.

Babies remember music and songs that they have heard in the womb for up to 12 months after they have been born. So, while singing a lullaby to baby once he’s arrived comes naturally to many parents, there’s a growing body of science showing the far-reaching benefits of singing to baby before he’s born as well. Unborn babies hear lower sounds better than high pitched sounds, so you may consider playing music with a lower frequency, although the most important thing is that you are enjoying it – either by relaxing quietly or by singing like a diva. (There is no real need to strap yourself up with the headphones on your tummy – your baby will hear the music anyway and you might just startle him!) Once baby’s born, carry on sharing music together… A growing baby thrives on ‘happy vibes’ and you can pass on those nourishing vibes as you listen to music and songs that you enjoy. Early exposure to singing, listening to and playing music can sharpen up a whole range of skills too... In babies and infants, greater exposure to music increases cell changes in the area of the brain concerned with speech. And since music uses both sides of the brain, it boosts other areas too, such as movement, creativity, spatial reasoning, memory and emotional intelligence. [caption id="attachment_1829" align="aligncenter" width="500"] 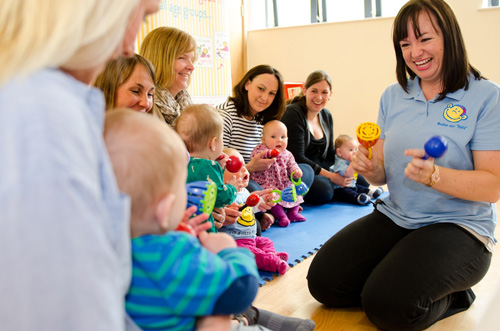 A growing baby thrives on ‘happy vibes’ and you can pass on those nourishing vibes as you listen to music and songs that you enjoy.[/caption] Melodies and lyrics teach us so much as we grow (would you really have learned the alphabet so quickly if it didn’t have a tune?) - they can be a gateway to a whole new level of learning and creativity. Simple songs and rhymes with a steady beat and repeated lyrics are particularly effective, so get singing “Row, row, row your boat”. It's fun, but it also helps children to develop one of the key skills of learning – the ability to observe and mimic the things going on around them. Joining in songs also gives young children the chance to learn new words. Easy rhymes help them realise that language is full of patterns which can be fun to play with - and these are the steps which lead on to humour and jokes. Music creates resilience too – a key to learning, built through something as simple as being determined to bang on that drum. Whether you’re musical or not, it’s simple (and free!) to give it a go. Spend time singing with your baby. Clap and experiment with sounds and watch their faces light up. You don’t need anything to get started except your voice (and down the track perhaps a few saucepans and spoon!)

Claire Grimes is a mum-of-two and Principal of Monkey Music Stratford-upon-Avon & Leamington Spa. She has been introducing little ones to the wonderful world of music for more than a decade. www.monkeymusic.co.uk