All those years before having children, I took sleep for granted, and never really needed much. All those years of wasted lie-ins!  In theory, I understood babies/children came with ‘broken sleep’ but it was only conceptual until those gruelling days of baby, where the idea of ‘propping your eyelids up with matchsticks’ suddenly took on a whole new meaning. 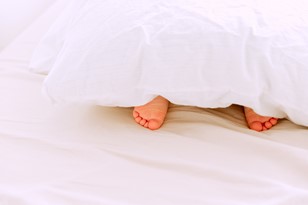 But it turned out the sleep deprivation continued well beyond those first few months and years, and, to my surprise, four years in, my son Samuel started experiencing night time anxieties. He came into our bedroom sometimes up to 20 times a night (if this sounds improbable, one night I counted - being prone to exaggeration, I wanted to see if I'd made it seem worse than it actually was. The reverse was true.)

I tried everything I could think of, from sleep experts, to funny snacks before bed, keeping an eye out for shadows on the wall.  I became convinced his bedroom might be haunted. Desperation was becoming a daily reality. Coupled with the sleep deprivation that second baby was contributing by now, I thought I might be going mad. Forget Samuel having nightmares, I was in a living one!

After six months, I was beside myself. One night, after soothing Samuel back to sleep twice, he screamed for me again. I stood on the landing and decided something had to change. I had to try something different. This is where it all got a little wacky. I’m certain no sleep expert would tell you this, but I decided to get Samuel out of bed, and we would address his fear and self belief using methods I use for my own mindset: changing his physiology, words and focus.

I got him to take a deep breath and square his shoulders, and together we said repeated firmly ‘there are no monsters’, until he was confident and relaxed. Then I asked him to repeat ‘I am Samuel’. I watched magic, as he turned from a timid, frightened little boy, into a strong, confident one, who no longer believed in monsters! With this confidence that his fears couldn’t get the better of him, he went back to sleep. Instead of reclaiming my peaceful night, I wrote a story for Samuel, ‘Samuel and the Monster’ which I then turned into my first children’s book. Any time there has been a hint that Samuel is fearful again, we have turned to the story.

As a huge believer in our mindset, physical state and focus affecting everything in our lives, I am really confident that taking this approach when our children are experiencing anxieties, of any description. Rather than allowing our heads to be filled with our monsters - our fears and anxieties - building our confidence with breathing, a strong physical stance and a more positive framework of vocabulary has the potential to completely alter our children’s confidence and reduce the power of their fears, and the challenges they may be experiencing.”

'Samuel and the Monster' children's book

Samuel has a monster in his room; a big, hairy monster which is taking up his whole room. It had been visiting him every night for weeks and no amount of ignoring it has made it go away. He has tried hiding, camouflage and holding his breath but nothing has worked to get rid of it.

We are giving away FIVE copies of 'Samuel and the Monster' book. Enter competition here. 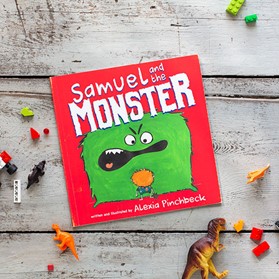 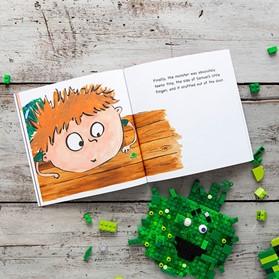