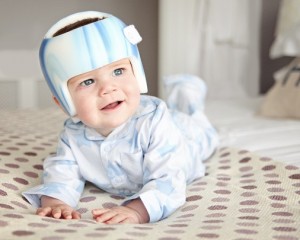 A baby wearing a TiMband (a form of plagiocephaly helmet). Guest Post by Technology in Motion Flat head syndrome is the umbrella term used to describe a cranial deformity where part of the head adopts a flattened shape. To differentiate between the different forms of flattening, clinicians use one of four names: plagiocephaly, brachycephaly, craniosynostosis or scaphocephaly. It is important to identify the correct form of flattening so that the most appropriate treatment can be selected.

Why does Flat Head Syndrome Occur?

In the UK, half of all babies under the age of 1 show signs of flat head syndrome to some degree. It can be difficult to pinpoint the root cause for this condition as there are several factors which can contribute to a skull flattening. These factors include: Positioning During the first few months of life, babies are not able to support themselves so they tend to lie on their backs and develop a positional preference (a position upon which they feel the most comfortable). When a child lies in the same position for prolonged periods of time, particular parts of the skull are put under pressure and begin to malform and flatten.

Premature Birth Children born before their full term have not had chance to fully develop, thus their skulls are delicately soft and vulnerable to malformation. Twins There is only a limited amount of space in the womb. When pregnant with twins, this space has to be shared between two children. The confines of this space can increase the chance of prenatal pressure on the skulls of the developing babies. Assisted Birth If forceps are used to assist birth, the soft, impressionable skull of the child can be ‘squished’ and forced to change shape. Premature Fusing of a Suture Within the skull there are 4 major sutures (a seam-like junction between 2 bones). Normally, these sutures do not fuse and harden until a child’s head has full grown. However, in some instances, one or more of these sutures can fuse prematurely. When this occurs, the head compensates for this by encouraging growth in another area of the skull. As a result, one part of the skull remains flat while other areas continue to grow. 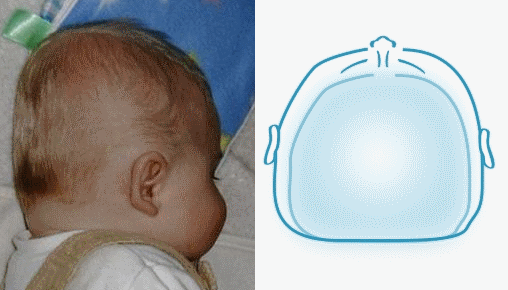 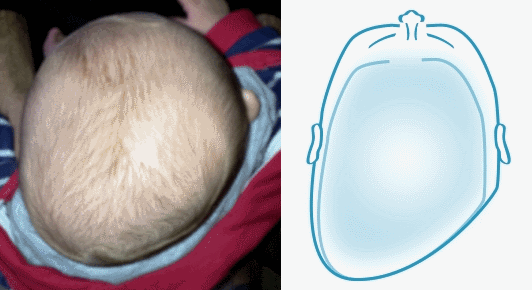 A child with plagiocephaly.[/caption]   Craniosynostosis (cray-nee-oh-sin-oh-sto-sis) Craniosynostosis is a rare condition which affects around 3 in every 10,000 live births. This form of flat head syndrome is more difficult to diagnose as it does not have a designated shape. Instead, the head shape of a child with craniosynostosis is determined by which suture in the skull has prematurely fused. How is it Treated?  Unlike brachycephaly and plagiocephaly, craniosynostosis cannot be corrected without surgery. To treat this form of flat head syndrome, a cranial facial unit should be consulted. [caption id="attachment_2171" align="aligncenter" width="558"]

Left: a child with craniosynostosis. Right: craniosynostosis in two of the sutures (different patients).[/caption] Scaphocephaly (scafe-oh-kef-aly) Scaphocephaly, otherwise known as dolichocephaly, is a form of flat head syndrome where the head adopts a long, narrow shape. This elongated head shape often comes hand in hand with other symptoms such as an over developed brow at the front and an over developed occipital area at the back of the head. How is it Treated?  Scaphocephaly has two root causes: positional flattening and synostosis. If there is a synostosis (a premature fusion of one of the sutures in the skull), it is recommended that you seek the assistance of a neurosurgeon or craniofacial team. If, however, there is no synostosis present, the symptoms of scaphocephaly can be rectified using a cranial remoulding helmet. [caption id="attachment_2177" align="aligncenter" width="261"] 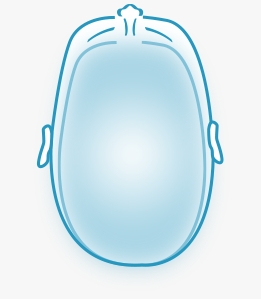 A representation of a child with scaphocephaly.[/caption]

What to do if you Suspect Flat Head Syndrome

If you have noticed a change in your little one’s head shape, you are not alone. Countless parents across the country are becoming aware of flat head syndrome and are seeking help. It is, however, always difficult to make that first step. For reassurance, guidance and support, read Nicola’s account of baby Jenson’s plagiocephaly journey. To gain that extra peace of mind, you can contact Technology in Motion for a free, no-obligation assessment. During this assessment, one of their experienced orthotists will measure your baby’s head and, with your permission, take a baby-friendly 3D image of your child’s head shape using a laser-free photographic scanner. Once the orthotist has a better understanding of your child’s condition, they will discuss possible treatment options which you and your family can review later at home.