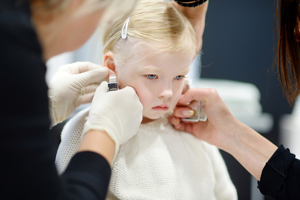 Written by Laura Chesmer from www.autumnsmummyblog.com Whether you pierce your baby or toddler’s ears is a personal choice that most parents have strong opinions about. The argument for banning it ignites online and in the media every once in a while, and petitions for making it illegal it garner thousands of signatures. Some people even claim it’s a form of child abuse.

Why do people pierce their baby’s ears?

In many parts of the world, it is a cultural expectation that a baby girl should have her ears pierced. In fact, to this day some hospitals in Spain carry out ear piercing within hours of a girl being born. In such places, even if a girl is dressed in obviously feminine clothing, she may be continually mistaken for a boy due to her unpierced ear lobes. There is also the possibility that this may trigger bullying when the child reaches school age as they are likely to be the odd one out.

Of course, part of these cultural expectations are formed by tradition. If your grandmother had your mother’s ears pierced as a baby, your mother had yours pierced under 6 months and it was the same for the rest of your family, it would seem quite normal to you. If there is a tradition such as this within the family, the more likely you are to follow it and also get your baby’s ears pierced.

Getting it over and done with

Getting a piercing is painful, so some parents decide to pierce their daughter’s ears as a baby to get it out of the way. After all, the vast majority of women have their ears pierced. In getting it done before they’re really aware of what is going on, it gets it out of the way and they probably won’t remember the pain. It may also be easier in some ways for parents to ensure that the fresh piercings are properly looked after than when the child is older.

Why are people against piercing ears so young?

As they’re so little and don’t understand what’s going on, babies and toddlers can’t agree to having their ears pierced. One moment they’re on your lap happy and gurgling and the next they’re in pain. There was actually a video that went viral around this time last year that showed just that, which made for upsetting viewing.

As babies don’t understand what’s going on and can’t speak, they can’t tell you that they don’t want ear piercings. They might grow up to not want any piercings and then they’ll be left with scars on their ear lobes when they stop wearing them. There’s also a small chance that they could grow up with gender dysphoria. If they feel like they’re supposed to be male and decide to change to that gender, those scars could be a painful reminder of a time when they were a girl. Many parents, myself included, think it should be the child’s choice to have their ears pierced. 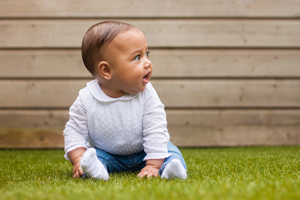 Some people think it’s selfish to pierce a child’s ears so young as it is putting them through unnecessary pain in order for their daughter to have pretty ears, as though they are some kind of fashion accessory. Some even go as far as calling it child abuse as it is physically harming them and causing them distress, while other types of physically harming children are illegal. While it is annoying to have to correct people who call your daughter a boy, is it worth putting your child through pain to show they’re a girl? I wouldn’t go as far as saying it’s selfish - however, I wouldn’t personally do it. Even after seeing my daughter in immense pain after open surgery at 5 weeks old, I still find it difficult when she cries in pain for far less serious reasons. She recently cut her cheek badly and we had to go to A&E for it to be glued. Seeing her cry while the nurses cleaned the wound and glued it was awful and I’d never put her through any kind of pain that I didn’t need to.

So, should it be illegal?

From time to time there is a surge of interest in this debate. Tens of thousands of people have signed petitions calling for it to be illegal to pierce a baby or toddler’s ears. Some even extend their views to it being banned for any child. This is for a variety of reasons, but the most common explanation are that the child isn’t old enough to understand the ramifications of piercings, or that they are too young to look after their piercings properly, putting them at risk of infection. Others believe there should be an age restriction applied, making it illegal to pierce the ears of children under a certain age. Purely from a practical point of view, this would be difficult to put into practice however as children don’t have photo ID to prove their age. A birth certificate could be taken along, but it would be easy to borrow the birth certificate of a sibling or friend’s child if you’re insistent on having your child’s ears pierced below the legal age. Such a law might even drive parents to pierce their children’s ears at home, which could also be very risky as they may not use the proper equipment or sterilise things correctly. People who want to make ear piercing illegal are in the minority however - whether they agree with piercing babies’ ears or not, most people believe that it shouldn’t be illegal. After all, there are already so many rules on how we raise our children, this would be yet another way of restricting parents. It is also worth pointing out at this stage that male circumcision is perfectly legal, but is painful and the child has no choice. It goes without saying that circumcision carries far bigger implications than ear piercing, yet it never seems to attract the same attention as ear piercing babies. 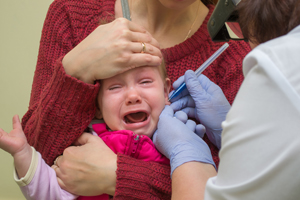 Some say that piercing such a young child’s ears is child abuse, however, there are far worse things that happen which make this debate pale in comparison. Calling it child abuse seems too harsh a label to me – and calling it such would potentially make real child abuse seem less significant. Ear piercing isn’t generally done maliciously, so it probably shouldn’t be considered as abuse.

Whether you want to pierce your daughter’s ears or not, it isn’t currently illegal. As such, it is your choice and you know the decision that you think is right for you and your child. Just make sure that you choose a reputable piercer in a clean, sterile environment and look after your child’s ears with care.

Laura Chesmer is a parenting and lifestyle blogger at www.autumnsmummyblog.com. She was inspired to blog after suffering from severe anxiety due to her daughter almost dying at 2 weeks old and requiring open surgery. She writes an honest account of parenting with helpful tips about the plethora thing she's interested in along the way. When she's not eating biscuits in the cupboard, hiding from her toddler, she can also be found on autumns_mummy