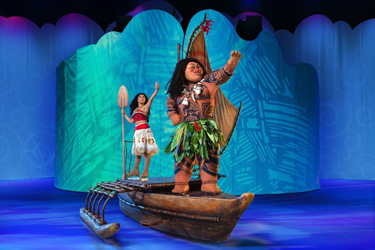 Audiences will set sail with the wayfinder Moana as she makes her UK debut live on ice in Disney On Ice presents Dream Big. This all-new production, produced by Feld Entertainment, assembles a collection of inspiring stories connected by a cast of characters with a desire to explore the depths, heights and horizons of their dreams. Alongside Moana and demigod Maui are eight tales of courage and heart, including Frozen, Beauty and the Beast, Aladdin and Tangled. Courage leads the way for Disney’s most daring heroines, in this brand-new ice skating spectacular. Travel to the kingdom of Arendelle with Anna, Elsa and Olaf in a dramatic retelling of the sisterly love that saved a kingdom. Jump into amazing adventures with Aladdin as he seizes his chance to outwit his adversaries in the marketplace of Agrabah. Discover uncharted worlds with Rapunzel and Jasmine. Battle the villain Maleficent in the form of a fire-breathing dragon alongside Prince Phillip, igniting the ice in a blazing spectacle. Dive under the sea with headstrong Ariel as she yearns to explore life above the waves and is willing to risk it all for curiosity and the thrill of adventure. And find the inner strength that comes from kindness and determination with Belle, Aurora and Cinderella. Plus, arrive early to celebrate 90 years of Walt Disney’s true original, Mickey Mouse. High-flying jumps, breathtaking skating and lovable Disney friends make Disney On Ice presents Dream Big an experience your family will never forget!

“Disney On Ice presents Dream Big was created with the intention to inspire everyone to explore their world by highlighting the defining moments of relatable characters who became their own heroes,” says Executive Vice President and Producer Nicole Feld. “Having both a daughter and son at home, I knew it was important to present a variety of Disney stories as well as show the connection between these stories and illustrate how a journey can unfold in many ways.” “Our greatest wish for our guests is that they will be inspired by these tales of bravery and see that anything is possible if you follow your dreams,” says Feld Entertainment Regional Vice President, Steven Armstrong. “Many of the stories we’re presenting – like Cinderella and The Little Mermaid - have been around for generations and stand the test of time. Others, like Moana and Frozen, inspire a new generation of young girls through self-reliance and a belief in themselves.” Dream Big captures all the magic and adventure of Disney’s immortal tales through cutting edge figure-skating, eye-catching costumes and stunning set designs. Through innovative lighting and thrilling special effects, audiences are transported to a world of imagination, where heroes of every kind seek to fulfill their dreams. High-flying jumps, breathtaking skating and lovable Disney friends make Disney On Ice presents Dream Big an experience families will never forget!