Designer Babies | Toddle About Skip to main content
Go Back 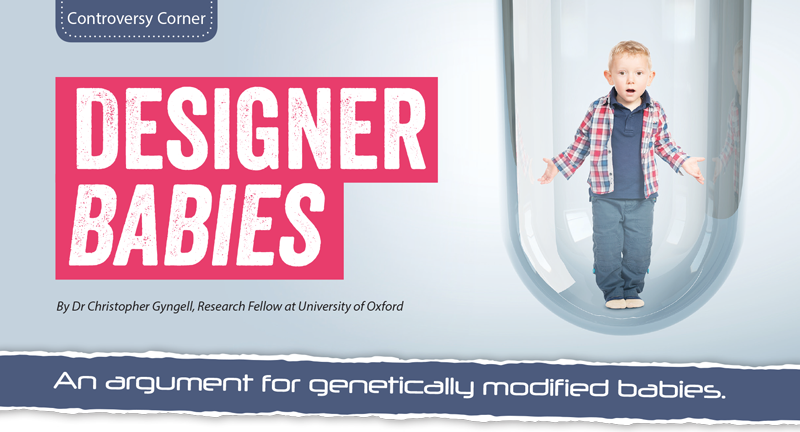 For decades, technologies have been available that alter the genetic makeup of animals. Using modified viruses to introduce novel genetic material, scientists have been able to modify the physical and cognitive characteristics of a number of species. However, these early technologies were not suitable for human use. They are imprecise, and make random changes to large segments of the genome. As such, only a small proportion of the animals that are the targets of these technologies do not suffer serious side effects.

In 2010, a revolution in genetic engineering began.Techniques which used engineered enzymes, rather than viruses, to alter DNA were developed. These techniques were given the name “gene editing” to reflect their increased efficiency and precision over older methods. In a very short space of time the gene editing technique CRISPR has been used to make precise and heritable changes to animals. It has been used to create malaria-fighting mosquitoes, drought resistant wheat, hornless cows and monkeys with targeted mutations. The potential applications of gene editing in a decade are difficult to imagine. Because of their increased precision, gene editing techniques are the first genetic engineering technologies to have serious potential as a clinically useful modifier of human DNA. In April 2015 it was announced that CRISPR had been used to make edits in human embryos for the first time. The study conducted in China attempted to use the CRISPR technique to reverse the genetic mutations that lead to the genetic disease muscular dystrophy with mixed success. In February 2016, the UK became the first country to officially approve gene editing research in human embryos. The decision means experiments in which the genes of embryos are manipulated will likely begin at the Francis Crick Institute in London within the next few months. It’s important to note that the proposed UK study would use gene editing on embryos for the purposes of research only. The study seeks to understand the role that different genes play in early pregnancy. This study could result in better conventional therapies to combat infertility and miscarriage. The embryos will not be implanted into a woman, and indeed will never leave a petri dish. The UK has a unique legal position, being one of the only countries around the world to allow gene editing on embryos for research, but have a ban on any reproductive uses. However, in the future, this law could change, and it may become possible to use such technologies for the purpose of reproduction –to create genetically modified babies. But if gene editing technologies were safe, legal and available to use on a developing embryo, would it be ethical to use them? I think it would be. Some people worry that if gene-editing technologies were available, then we put the human race on a slippery slope to the creation of ‘designer babies’. But I believe we have strong moral reasons to use these technologies to protect our future children from disease and suffering. Changing your child’s genes to improve their health is consistent with good parenting. [caption id="attachment_1116" align="aligncenter" width="365"] 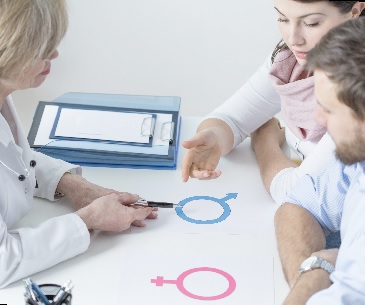 Some people worry that gene-editing techniques will allow parents to choose desirable traits in their children, rather than using it for purely health reasons[/caption] For example, many women take vitamin D supplements through pregnancy. This is believed to make the developing child more resistant to bone disease like rickets, and autoimmune diseases like asthma and multiple sclerosis. We generally think pregnant women who take vitamin D supplements are acting responsibly. But vitamin D also alters the genes of the developing child – it changes the way its genes are expressed. If we think women should take vitamin D supplements in pregnancy, we therefore think it is OK to make some genetic changes to a developing child in order to improve their health. Gene editing technologies make a different sort of genetic change to an embryo than vitamin D supplements. They change the genetic sequence, rather than the way genes are expressed. However, suppose that we discover that vitamin D supplements actually did work by changing the genetic sequence of a developing embryo? Would this discovery mean that we should advise women to stop taking vitamin D supplements during pregnancy? I think not. What’s important is that taking vitamin D supplements while pregnant protects the developing child from developing diseases later in life. The mechanism through which this is achieved is irrelevant. In the future it will be possible to use gene editing technologies to make a small number of genetic changes to protect our children from disease. The total length of the human genome is over 3 billion base pairs. In some cases, changing just one base pair in an embryo will prevent horrible diseases later in life. That means changing less than 0.0001% of your child’s genome can protect them from suffering. This seems clearly ethically justified to me. Furthermore, many now accept the use of technologies such as preimplantation genetic diagnosis (PGD) to select against inherited disease like cystic fibrosis and muscular dystrophy. This involves creating several embryos and testing each for genetic predispositions to disease. The healthiest embryo is then implanted, and the others are often destroyed. If it is acceptable to use PGD to avoid disease, it’s not clear why it would be unacceptable to create just one embryo and use gene editing technologies to correct any disease causing genes. When used in this way, gene editing is the moral equivalent of curing a disease. People’s main objection to gene editing technologies stems from the fact they could be used not just to protect children from disease, but to also influence their other traits. People shudder at the thought of parents picking and choosing the characteristics of their children, just as they pick and choose the accessories for their nurseries. We do have good reasons to be concerned about this prospect. Genes fashionable in one generation may prove to be harmful in the next. In addition, parental control of the gene pool could reduce valuable forms of genetic diversity. However, a fear of designer babies should not distract us from the goal of healthy babies. There is no reason we couldn’t limit the use of gene editing technologies to disease prevention, just as we currently do with PGD. That is not to say I think we should be using gene editing technologies now. I am glad the UK has a ban on the reproductive uses of gene editing technologies, as it will be many years until we know whether these technologies will be safe enough to use for reproduction. However, in a decade or so, if these technologies have been proven safe and precise enough for human use – I believe we will have strong moral reasons to change the law and use them to protect our children from disease and suffering.

Dr Chris Gyngell is a Research Fellow at the University of Oxford’s Oxford Uehiro Centre for Practical Ethics. His research interests lie primarily in bioethics, moral theory, and the philosophy of health and disease. He is currently working on a Marie Sklodowska-Curie Fellowship funded project titled "Selecting, Creating and Modifying Embryos", which will investigate the ethical and legal implications of new reproductive technologies, such as the gene editing technique CRISPR.