Mum-of-two and local baby swim school owner, Tamsin Brewis, has been teaching children from across Milton Keynes to swim at pools in the region for more than 17 years. For World Health Day on 7th April, Tamsin has contributed to a national study, entitled ‘The Physical Health of Children and Young People’. The study has been penned by The Children’s Alliance, an organisation for the betterment of children’s lives in the UK. Tamsin, who owns baby swim school Water Babies Bucks and Beds, feels it’s vital to make widely known the major problems and shortfalls with the current issue of exercise and physical health of young people. Without challenging the status quo, the paper states that “we run the risk that the next generation of UK adults will be the least healthy in living memory”. 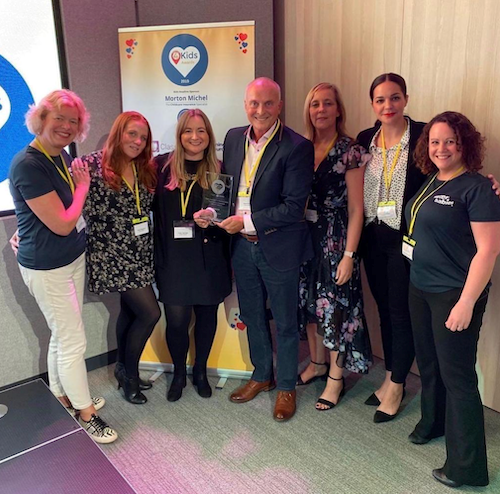 The Children’s Alliance was launched by Steve Franks, the former CEO of Water Babies, in 2018. The main goal of the initiative is to appoint a cabinet minister for Children and Young People. The campaign holds a special place in the hearts of the Children’s Alliance; the genesis of the campaign was hugely admired and adored by Steve, who sadly passed away in April of 2020. Those carrying the torch for Steve are determined to continue his legacy and carry out his life ambitions.

The Alliance is releasing a series of papers covering all issues of health and wellbeing faced by young people. This latest paper, compiled by a team of experts including doctors and scientists, takes an in-depth look at the physical health of children and young people. Tamsin, who has played a pivotal role in the campaign since its inception, has contributed to some key sections of the paper. Tamsin is an expert on physical development of children in their early stages, due to her 20 years as a baby swim school instructor. Like many of her colleagues at Water Babies, Tamsin is passionate about the health, wellbeing and future security of children in her community, having raised over £24,000 pounds in her region for baby charity, Tommy’s, in the last year alone.

As well as comments on the gender disparity in physical activity, Tamsin highlights how children’s physical activity can aid cognitive function, mental health and bodily strength, as well as muscle development and spatial skills.

Tamsin also shares her expertise on the value of exercise during pregnancy – and the long-term benefits for mum and baby. Recent research suggests inactive pregnancy is linked to a lowering of lung function in babies, which can lead to an increase in asthma in children around age 10. To counter the lack of knowledge around the subject, Tamsin suggests interventions to promote a child’s healthy physical development during pregnancy should begin with prospective parents, as many from underprivileged backgrounds or socially difficult circumstances will only consult healthcare providers later in a pregnancy, by which time the critical period is missed.

Tamsin told us, “I’ve learned so much through the alliance, but I feel there’s so much more that everyone can learn. It’s damaging that there isn’t a cabinet minister for children in place - especially with all the developments over the past few decades in understanding the importance and long-lasting impacts of a child’s experiences during the early stage of their life. I implore everyone to support not only us, but the future generations that will follow us.”

With a detailed look at societal problems faced by our children as well as the effort applied to the suggestion of solutions to these problems, it’s clear the Children’s Alliance is determined to force action and manifest positive change to the systems currently in place. They believe their campaign to create a minister for children that will inhabit the Cabinet is the only way such drastic but necessary change will occur. The papers are set to keep coming and the heart of the cause to remain thumping – with Tamsin continuing to fly the flag for the positive impact the Children’s Alliance will have for generations to come.

Or to read the full report or learn more about the Children’s Alliance, please visit https://childrensalliance.org.uk/

To find out more about Water Babies, please visit https://www.waterbabies.co.uk/