Swashbuckling Pantomime | Toddle About Skip to main content
Go Back 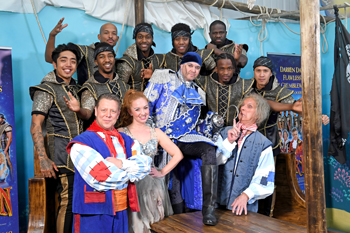 Darren Day, Flawless,The Grumbleweeds and Abigail Dever brought a touch of early Christmas magic to Northampton today as they officially launched Peter Pan, this year’s swashbuckling Royal & Derngate pantomime, with a photo call at Northampton’s Riverside Hub play centre. Actor, singer and television presenter Darren Day will play the dastardly Captain Hook. Darren has had a varied career having starred in Joseph and the Amazing Technicolor Dreamcoat, Grease, Summer Holiday and Godspell and numerous UK tours. He since went on to host You Bet! and Don’t Try This at Home for ITV and appeared in The Bill and Holby City. Last year Darren came third in Celebrity Big Brother, released his album This is the Moment and starred as Tick in the UK tour of Priscilla Queen of the Desert. Last year Darren starred as the Teen Angel in Grease across the UK, joined the cast of Sky TV comedy Stella, and starred in Hollyoaks and Holby City. This year Darren will be seen in the feature films Rudy and Demon Eye. This production marks Darren’s third time donning the infamous hook.

Street dance troupe Flawless, made world famous having competed in the third series of ITV’s Britain’s Got Talent, have been a mainstay of the hip-hop dance scene for over a decade having been formed by Marlon Wallen and Amelia Benoit in 2005. That same year the troupe won the annual National UK Street Dancing Championships and made their television debut on the BBC’s The Slammer. In 2009 the group auditioned for Britain’s Got Talent, unanimously winning over the show’s judges and voting public with their array of spectacular routines which saw them progress to the show’s finals. The following year the boys took to the road in their Chase the Dream tour, which played major theatres in the UK for three months, was released on DVD and, due to popular demand, sent back out on the road in 2011. They made their feature film debut in 2010 in StreetDance 3D and its 2012 sequel StreetDance2, made guest appearances in EastEnders E20, collaborated with MOBO and Urban Music Award winner Chipmunk and appeared alongside Kylie Minogue in the presence of Her Majesty The Queen at the Diamond Jubilee Concert outside Buckingham Palace which was broadcast live to the nation. They also appeared as part of the 2012 Paralympic Opening Ceremony and made history collaborating with the English National Ballet. Robin Colvill and James Brandon, better known as The Grumbleweeds, will star alongside them as Smee and Starkey, Captain Hook’s first mates. Regulars on the UK comedy scene since the 1960s across radio, television, theatre, cabaret and pantomime the ‘guv’nors’ of live comedy will bring their inimitable style of family entertainment, musical comedy and laugh-out-loud routines to the production. Abigail Dever will play the role of Tinker Bell. Abi has performed in hit Andrew Lloyd Webber music Starlight Express across the world since 2011 and has previously starred as Princess in Jack and the Beanstalk. Produced once again by Qdos Entertainment, Peter Pan will bring all the laughter, spectacle, special effects and festive magic audiences have come to expect each year from Northampton’s ultimate pantomime. Executive Producer for Qdos Entertainment, Jonathan Kiley, said: “We’re delighted to have such a wealth of talent starring in Peter Pan this year, from the amazing routines of Flawless to Darren Day’s unique and uniquely cool take on Captain Hook with the madcap comedy of The Grumbleweeds, it’s going to be a panto journey everyone will want to embark on this festive season.” Jo Gordon, Interim Chief Executive at Royal & Derngate added: “Christmas is a very special time of year, when many children are introduced to theatre for the first time through pantomime. Peter Pan is such a magical story and I am excited that we can stage this spectacular production of such a firm family favourite.” Packed to the crows-nest with laugh-out-loud comedy, spectacular special effects, music, action and, audiences shouldn’t leave it any longer to hook tickets to Northampton’s high-flying pantomime adventure, Peter Pan, or they’ll be forced to walk the plank.

Peter Pan runs from Friday 7 to Sunday 30 December. For more information or to book tickets, call Box Office on 01604 624811 or visit www.royalandderngate.co.uk. Royal & Derngate, Guildhall Road, Northampton NN1 1DP Tickets: From £12.50* * A charge of £3 applies for all transactions of £15 and over. Does not apply to Groups, Friends or Disabled Patrons, and is per-transaction, not per-ticket.