Jesse Toksvig-Stewart talks about what it was like to grow up with gay parents. I was chatting with my step sister recently. We were discussing all things about everyday life, catching up. She’s still at school and I asked her how everything was going. She announced to me that there was another child in the year below who had two mums. I was so pleased to hear that  she had an ally at school. This was something that I never had at all growing up. It is not really that long ago that being a gay man was illegal in the UK. The de-criminalisation act of homosexuality was put forward 1967. It is so shockingly close to our noughties decade, that people are somewhat in disbelief that it took so long. The world is changing and people are becoming more accepting than they were when my parents or I was growing up. I’m 30 years old and still get moments where people say to me, “I don’t think that I have ever met anyone with lesbian parents before”. It is still unusual. My parents were at the forefront of same-sex parenting in the late 80’s. They didn’t know anyone else who was gay or lesbian and had babies. I guess this is where you can say that the times have really changed.

It is unimaginable and when my parents tell me the stories now, it seems unbelievable. They were so worried about having their first child, me, that my mother opted for a home birth. Mostly because she believed in the process of a home birth, but they were also terrified. She was scared to death that someone from social services would come and remove me. A lot of people judged her harshly at that time - I believe at one point someone told her that she was going to give birth to the children of Satan. This was the 80’s! Not the dark ages. These fears seem almost dystopian when you say them out loud. But these were their legitimate fears of the unknown. They had no role models to base their family on. There was no social media influencers to turn to for advice or Facebook groups to gain confidence. It was just them. Two women, creating a family together. All the while with fear in them that someone might believe that the way they produced their family was wrong. 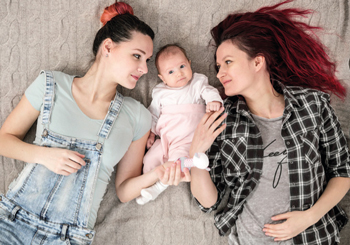 I always find it funny when someone approaches me to ask what it is like growing up with lesbian parents. But given the circumstances and how far we have come, people do feel like it is their right to ask. I think I find it peculiar because I would never think to enquire what it was like to grow up with heterosexual parents. Even though I have never experienced growing up with a mum and a dad, I can imagine the experience was exactly like the one that I had. I grew up in a loving, secure, stable, fun and, dare I say it, normal family. I dislike using the word ‘normal’ when describing something, especially in the context of families. Because what is normal in this day and age anyway? There are so many different types of family in our society that the nuclear family is no longer normal anymore. Living with unmarried parents and being born out of wedlock is no longer a stigmatism, and being bought up in a blended family of step relatives is not considered rare anymore. So really, the question you should be asking is not “What was is like growing up with lesbian parents?” but instead “What was it like growing up in your family?” By asking that question you would receive a much more open answer from the recipient. So here goes. What was it like growing up in my family? I had two working parents. Two younger siblings. One dog. Two cats. We lived in a four-bedroom house (which at one point may as well have been a two-bed because inexplicably my siblings and I decided that for at least three years we would all sleep, cramped, in the same room together!) We went on holidays together, had picnics, went to school, were read bedtime stories, and put on endless shows in the playroom for my parents. It really was quite… regular. I had two loving parents, and I was perfectly happy - I guess as a child you don’t really tend to want something different if you are completely content and loved. 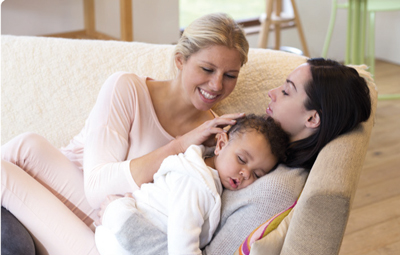 I think that people expect being brought up by lesbian parents will be this wild rollercoaster of unusual parenting. But that certainly wasn’t my experience. This is not to say that our unique family set up came around easily though. Remember the impending doom about birthing Satan’s children? When my step sister was born, society had moved on from the 80’s and into the millennium. Which is why she can account for more than one child with same sex parents at her school. What a wonderful world to live in! Although growing up with lesbian parents never made me feel like I was missing out on anything, it must be a magnificent feeling to know that there are people out there with a family set up like yours! It’s just not something I had. When I exclaimed about how wonderful it must be for my step sister to have with someone at her school with a similar family, she hastily replied, “Well, actually I am the only one with two mums in my year!” There she was. Wearing it like a badge of honour and reclaiming her place in the family ladder. So I guess the times really have changed. There is more exposure and more families living their freedom and although we have a long way to go, I am enjoying the view as we do.

Jesse Toksvig-Stewart and Kat Willott are university friends who started a business together call Ugly Duck Books. They have co-authored and self published a kids record book for alternative families called My Amazing Family and Me. Web: www.uglyduckbooks.co.uk, Blog: www.uglyduckbooks.tumblr.com, Facebook: www.fb.com/uglyduckbooks