Afghan artists present a festival of Afghan kite-flying, storytelling, music, poetry and dance 15 host cities across the UK and Europe taking part on 20th August Nationwide workshops will teach communities how to make a kite from scratch Festival calls on the UK Government to treat all people seeking asylum fairly and equally, including those from Afghanistan. 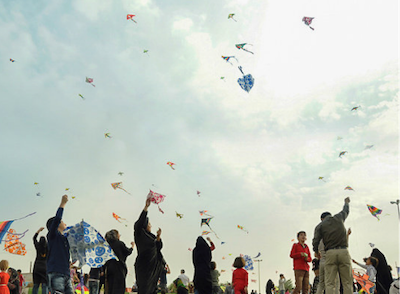 On Saturday 20th August 2022, to mark the one-year since the fall of Afghanistan to the Taliban, Good Chance Theatre (creators of The Jungle and The Walk with Amal)  will launch Fly With Me, an immersive, multi-city kite flying festival presented by Afghan artists, actors and sportspeople.

Spread across 15 locations in the UK and Europe, Fly With Me celebrates the ancient Afghan craft of kite-flying in an aerial act of solidarity with the people of Afghanistan. The artform, alongside music, theatre and dance, were previously banned by the Taliban during their occupation of the country.

Afghanistan is experiencing one of the most devastating humanitarian crises in the world. More than 23 million people - over half the population - face acute hunger according to the UNICEF World Food Program. Of the 16,000 Afghan refugees evacuated by the UK last year, 12,000 remain housed in unsuitable temporary accommodation, unable to cook for themselves, or integrate into the local community.

As the UK shifts its focus elsewhere, the Home Office has slashed the number of Afghan refugees allowed into the UK and the Afghan Resettlement Scheme has stalled. In the midst of dwindling public awareness, Fly With Me invites people from all backgrounds, regardless of race, nationality or religious beliefs, to come together and fly a kite - sending a message to the world to ‘Remember Afghanistan’ and treat Afghan refugees with the same respect and open heartedness shown to refugees from Ukraine.

15 cities and towns across the UK and Europe will take part in the Fly With Me kite flying festival, including Brighton, Bradford, Dover, Folkestone, Glasgow, Liverpool, London, Manchester, Northamptonshire, Scunthorpe, Sheffield and in the UK, and Berlin, Pas-de-Calais, Paris and Copenhagen in Europe. Many UK festivals including Manchester International Festival and Shambala will be taking part, and the Fly With Me organisers are calling for more towns, cities, festivals and communities to get involved.

The cultural significance of kites and Afghanistan’s complex history will form part of the festival's storytelling, alongside music, poetry and dance from Afghan artists and other community groups.

In kite making workshops across Europe and the UK, Afghan storytellers will bring to life the story of Zaki, a 12-year-old boy in Kabul who, in keeping with 800-year-old traditions, loves to fly kites each autumn. His brother Bahram was forced to flee by the Taliban, so Zaki is learning how to make kites alone with his younger sister, Marwa. Good Chance will invite thousands of people across the UK and Europe to hear Zaki’s story, and learn how to make and fly kites together with him.

A kite-making pack of instructions, materials and short films will be available for families, schools, town councils, community groups and individuals to create their own Afghan kites. Good Chance will also share a blueprint of the kite-making and storytelling workshop, tips on flying kites and ideas for communities and councils putting on their own event.

Fly With Me has been developed with the master Afghan kite maker, Sanjar Qiam, who founded a toy shop in Brighton and hosts regular kite making workshops across the UK, Afghan actor, storyteller and director Elham Ehsas (The Kite Runner, Homeland) and Afghan musician and creative consultant for Fly With Me, Elaha Soroor.

Fly With Me is delivered in collaboration with lead humanitarian partner Afghanaid, raising funds for their ‘By Her Side’ match-funding campaign to support women in rural Afghan communities, and with lead supporters Arts Council England.

Good Chance Theatre previously created The Jungle, exploring the experience of refugees in the Calais Jungle co-produced with the National Theatre and Young Vic, and The Walk with Little Amal, a co-production with The Walk Productions Ltd and Handspring Puppet Company, featuring a 3.5m high puppet of a young Syrian refugee girl highlighting the journey taken by refugee children across Europe, which won the Time Out Best Public Artwork Award 2021.

Joe Murphy & Joe Robertson, Co-Artistic Directors at Good Chance Theatre, said: ‘Kites remain attached to the ground through a single thread but fly free of the borders that define the land. Kites are the embodiment of freedom and play. Looked at collectively, on the stage of the sky, kites represent togetherness, our difference, and our shared humanity. But the last time the Taliban ruled Afghanistan, kites were banned - along with music, free journalism, theatre and dancing. This simplest of devices of play and wonder, and gaming and competition, is also one of the most contested spaces in recent global history. That affront to freedom of expression is clearly being perpetuated again with the Taliban back in power. Fly With Me is a reminder to the world: Remember Afghanistan.  And so, by making and flying kites in the Afghan tradition, led by Afghans who have made new lives in Europe, and open to all, we will be standing in solidarity with Afghans in the latest affront to their freedom and will remind the world of the devastating humanitarian crisis still taking place in Afghanistan today.’

Actor, director (Kite Runner, Homeland) & Fly With Me Co-Creator, Elham Ehsas, said: ‘During the 20th Century, the Afghan flag was changed 19 times - more than any other nation on earth. During my lifetime, my country’s colours have been painted, wiped, repainted then wiped again 15 times. But we have always flown kites. The colours change but our skies are the same. Let’s take to the skies and remember that Afghanistan’s flag has been wiped once again.’

Master kite-maker, Afghan refugee based in the UK, & Fly With Me Co-Creator Sanjar Qiam, said:
‘Kite flying is one of the world’s earliest art forms - there are depictions of kites in cave paintings in Indonesia which are 40,000 years old. In Afghanistan, kites occupy a unique space between national art form and national sport. They are a universal symbol of expression, skill and cultural pride. Fly With Me is an act of solidarity with the people of Afghanistan and an opportunity for all of us to come together and feel between our fingers the strings that connect us to this incredible country, its culture and its people.’

Plus events in Brighton, Liverpool, Nuneaton, Scunthorpe, Sheffield and on 27th August at Shambala Festival in Northamptonshire.